Boeing Suspends Forecast Until a Future Date Amid 737 Max Woes

Boeing Co. (BA.N) earnings missed analysts’ estimates for just the second time in five years as executives grapple with one of the worst crises in the planemaker’s century-long history.

The manufacturer abandoned its 2019 financial forecast as it deals with the aftermath of two deadly crashes of its 737 Max aircraft, according to a company statement Wednesday. Boeing also revealed it hadn’t repurchased shares since mid-March after spending US$2.3 billion on its stock in the quarter. The second fatal accident within five months occurred March 10 in Ethiopia, spurring regulators globally to ground the single-aisle models.

Boeing’s first-quarter results were weighed down by a US$1 billion cost as it slowed production of the 737 to conserve cash until the Max is cleared to resume commercial flights. The company also booked charges to revise training for pilots and update the Max’s software, which has been linked to both disasters.

A steep drop in deliveries of the 737, Boeing’s main source of profit, dragged down first-quarter results. Boeing reported adjusted earnings per share of US$3.16, nine cents less than the average of analysts’ estimates compiled by Bloomberg. But investors focused on better-than-expected free cash flow of US$2.3 billion as a signal of the resilience of the aerospace giant’s sprawling franchise.

“There’s a lot of uncertainty, but the quarter wasn’t as bad as people feared,” Ken Herbert, analyst with Canaccord Genuity, said in an interview. Since regulators will determine when the Max is cleared to fly again, Boeing doesn’t want to provide guidance “because that implies they know when the Max goes back in service.”

Despite all the grim news, the shares rose 1.1 per cent to US$378.11 at 9:58 a.m. in New York as investors breathed a sigh of relief that the results weren’t worse.

Through the close on Tuesday, Boeing had fallen 11 per cent since the crash in Ethiopia, the biggest drop on the Dow Jones Industrial Average. That accident and an October disaster in Indonesia involving the 737 Max took 346 lives.Investors will look to the company’s conference call for additional information on Boeing’s strategy for dealing with the financial aftermath of the global grounding. While first-quarter earnings trailed analyst estimates, the real focus for investors is on Boeing’s effort to contain the damage to its reputation and the lucrative 737 program, the company’s biggest source of profit.

Chief Executive Dennis Muilenburg and Chief Financial Officer Greg Smith will discuss Boeing’s results and response to the 737 Max crisis in a call slated for 10:30 a.m. in New York.

“Everything is going to be 737 Max: when it is back in the air, when do deliveries resume,” said George Ferguson, an analyst at Bloomberg Intelligence. “I don’t think we’ll get a concrete answer today.” 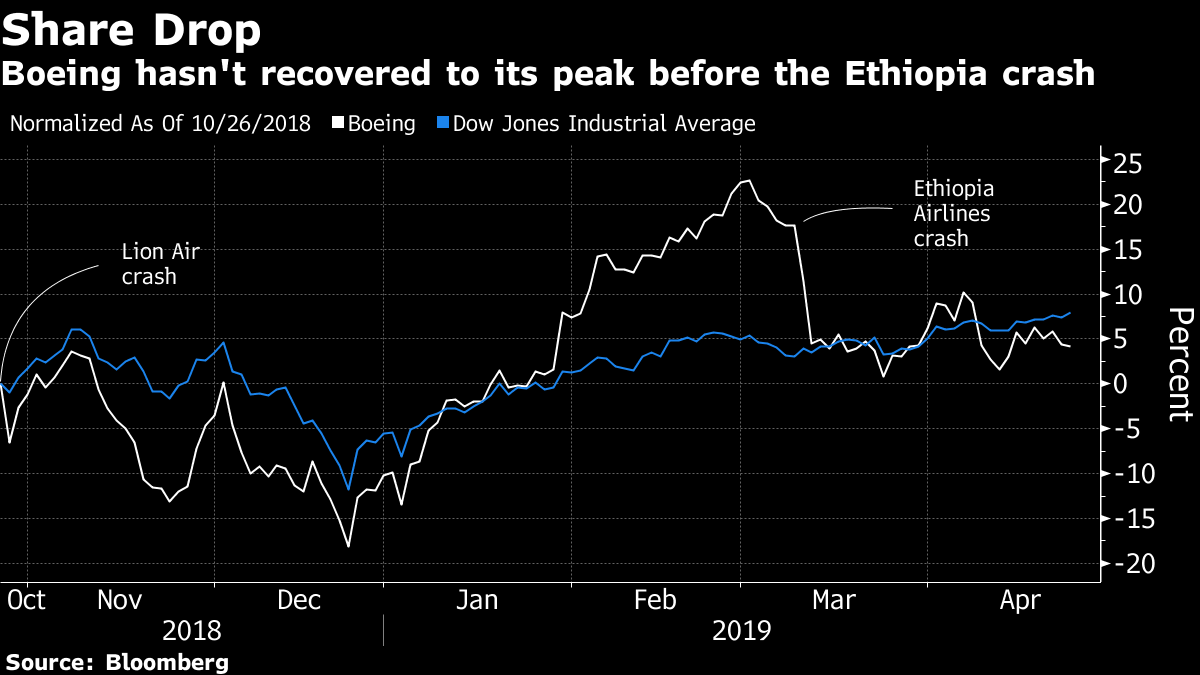 The manufacturer has redesigned software linked to the Ethiopia and Indonesia crashes, and is expected to submit the changes to the Federal Aviation Administration soon. But convincing regulators -- and passengers -- of the Max’s safety will be a complicated task.

While the Max’s indefinite grounding drags on, Boeing’s management team is focusing on conserving cash and tamping down costs. The company has temporarily slowed its 737 final assembly line by 19 per cent to build only 42 planes a month, the first such factory slowdown since the Sept. 11 terrorist attacks disrupted air travel in 2001.

The rate cut was abrupt -- such moves are typically flagged a year in advance. Blunting the blow somewhat, Boeing is picking up the bill as suppliers such as Spirit AeroSystems Holdings Inc. continue work at the previous production pace of 52 planes a month.

The changes to 737 production didn’t take effect until mid-April, so the full impact on cash and profit will first be reflected in second-quarter earnings. But since the measure was announced in late March, the US$1 billion impact under program accounting was reflected in first-quarter profit margins for Boeing’s commercial division.

Operating profit for the commercial-airplane unit was 9.9 per cent of sales for the first quarter, compared with 11 per cent a year earlier. Boeing’s defense division had a 13 per cent operating margin during the latest quarter, while the services unit posted 14 per cent.

Adjusted earnings fell to US$3.16 a share in the first quarter, missing the US$3.25 average of analyst estimates compiled by Bloomberg. Sales slipped 2 per cent to US$22.9 billion, in line with expectations.

Robust sales at the defense and services divisions helped Boeing withstand the pressure from the Max grounding, as did a production increase for the 787 Dreamliner, another source of cash. Still, there’s a risk that investors will lose patience if regulators are slow to allow flights of the 737 Max, a key source of cash for Boeing.

The Max’s devastated safety record, production miscues for a much-delayed military tanker, and a wave of negative media coverage threaten another selling point for investors looking at Boeing, said Carter Copeland, an analyst with Melius Research. After the 787’s early stumbles, the Chicago-based planemaker began a systematic campaign to root out risk in an effort to protect shareholders from negative surprises, he said in a report earlier this week.