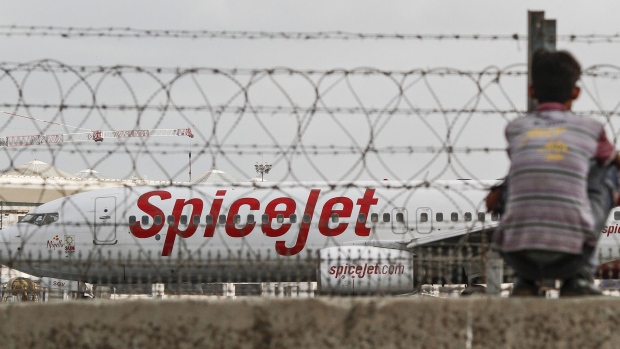 A boy look out towards a SpiceJet Ltd. aircraft parked on the tarmac at Chhatrapati Shivaji International Airport in Mumbai, India, on Thursday, May 23, 2013. SpiceJet, India's third largest Indian airline by domestic market share, is scheduled to release their fourth-quarter earnings on May 24. , Dhiraj Singh/Bloomberg

Boeing Co. (BA.N) has told one of the biggest 737 Max buyers, Indian budget carrier SpiceJet Ltd., that the grounded jet should be back in the air by July, signaling a quicker return for the plane than many in the industry expect.

“The timeline that’s been communicated to us based on their experience is July -- end of June basically,” SpiceJet’s Chief Financial Officer Kiran Koteshwar said in an interview. “We are expecting it to be July.”

That’s a more bullish timeline than most regulators and airlines have predicted after the best-selling jet was grounded worldwide in March following crashes in Indonesia and Ethiopia.

European regulators assessing proposed changes to the Max are planning to scrutinize the jet’s entire flight-control system before a return to the skies can be approved, while U.S. aviation regulators said they won’t rush the matter. Regulators in Indonesia, one of the biggest markets for the plane, has signaled it may keep the jet parked until next year.

“All the other regulators will also have to be happy with them,” Koteshwar said. But he said Boeing is “pretty confident” it will get all approvals by July.

Representatives for Boeing in India didn’t immediately respond to a request for comment.

Officials from China, Canada and the European Union have signaled they intend to independently review changes to the Boeing planes before allowing flights to resume. South Korean authorities are also said to be making their own decision, after closely monitoring steps taken by regulators in Europe and China.

SpiceJet has been in talks with Boeing for compensation although hasn’t yet received any, Koteshwar said. The amount will depend on how long the plane stays on the ground, he said.

The Indian carrier, which had taken delivery of 13 Max jets before the model was grounded, still expects to receive as many as 25 more in the current financial year. It has as many as 205 of those aircraft on order, including options.