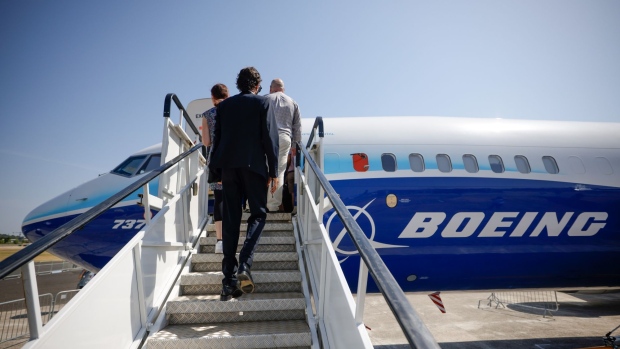 (Bloomberg) -- Boeing Co. agreed to pay $200 million to settle Securities and Exchange Commission allegations that the company and its former Chief Executive Officer Dennis Muilenburg failed to disclose safety issues with its 737 Max jetliner, resolving one of the final US investigations related to two crashes that killed 346 people.

The settlement, announced by the SEC on Thursday, concludes a probe into whether Boeing withheld key information from shareholders about a flawed software system linked to the 2018 and 2019 crashes. The SEC said the company and its former CEO violated securities laws by making “materially misleading” public statements.

Without admitting or denying the findings, Boeing and Muilenburg agreed to pay $200 million and $1 million, respectively, to settle the allegations.

“We have made broad and deep changes across our company in response to those accidents—fundamental changes that have strengthened our safety processes and oversight of safety issues, and have enhanced our culture of safety, quality, and transparency,” Boeing said in a statement, referring to the two 737 Max crashes. Muilenburg didn’t immediately respond to a request for comment.

Boeing shares were little changed after the close of Thursday’s trading session. The stock has declined 31% so far this year.

The twin tragedies prompted one of the longest groundings in aviation history. Boeing previously paid a $243.3 million fine as part of a $2.5 billion settlement with the US Justice Department to end a criminal investigation in January 2021.

The SEC probe centered on repeated assurances by Muilenburg that the company’s engineers had followed its safety practices in designing a software system, triggered by a single point of failure, that overwhelmed pilots in the two fatal crashes.

About a month after Lion Air Flight 610 plunged into the Java Sea off the coast of Indonesia, Boeing issued a press release “edited and approved by Muilenburg” that highlighted maintenance shortfalls by the airline and gave assurances of the airplane’s safety, the SEC said. The company statement didn’t disclose that an internal safety review had already determined that a flight-control system known as “MCAS” posed an ongoing issue, and that Boeing had already begun redesigning the software.

After a second 737 Max crashed in Ethiopia in March 2019 -- which led regulators to ground 737 Max jets around the globe -- Muilenburg told analysts and reporters that the company had confirmed that “we followed exactly the steps in our design and certification processes that consistently produce safe airplanes.”

“In times of crisis and tragedy, it is especially important that public companies and executives provide full, fair, and truthful disclosures to the markets,” SEC Chair Gary Gensler said in a statement, adding that Boeing and Muilenburg failed in their obligations. “They misled investors by providing assurances about the safety of the 737 MAX, despite knowing about serious safety concerns.”

(Updates with Boeing comment in third paragraph and details throughout.)