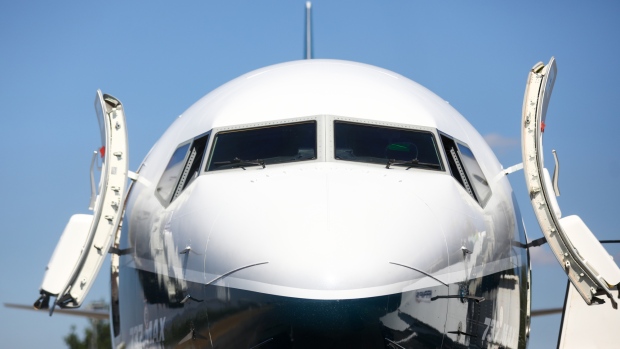 A Boeing Co. 737 Max 7 jetliner sits on the tarmac during preparations ahead of the Farnborough International Airshow (FIA) 2018 in Farnborough, U.K., on Sunday, July 15, 2018. The air show, a biannual showcase for the aviation industry, runs until July 22. , Bloomberg

Boeing Co. (BA.N) should eventually appoint an independent director to lead its board rather than concentrating power in the hands of the chief executive officer, two leading shareholder-advisory firms said.

Investors would benefit from stepped-up board oversight given the damage to Boeing’s reputation and market value after two fatal crashes of its 737 Max jetliner, Institutional Shareholder Services said Tuesday. Glass Lewis echoed the concerns ahead of Boeing’s annual general meeting April 29.

But the shareholder advocates stopped short of calling for the planemaker to strip power from current CEO Dennis Muilenburg. Rather, they urged investors to support a non-binding proposal that would give Boeing directors the “discretion to phase in this policy” in the next leadership transition.

Questions about Boeing’s actions in developing, certifying and marketing the 737 Max are at the heart of criminal and Congressional investigations. The plane was grounded around the world a month ago, after the second crash.

Any missteps by Boeing in resolving the issues, or lapses with future aircraft programs, “could have a devastating impact on the company’s business prospects, its brand and its reputation, for years,” ISS said. “Shareholders would benefit from the most robust form of independent board oversight, in the form of an independent board chair.’’

The recommendations underscore the pressure on Muilenburg as he seeks to lead Boeing through one of the biggest crises in its almost 103-year history. Company engineers are redesigning a stall-prevention system that was linked to a Lion Air accident in October off the coast of Indonesia, and the fatal dive of an Ethiopian Airlines plane near Addis Ababa last month. Combined, the disasters killed 346 people.

“Boeing has a strong, actively engaged board, which brings a high level of expertise, dedication and commitment to its oversight function, including with respect to the safety of the 737 Max and our other airplane programs,” Chaz Bickers, a company spokesman, said by email.

Boeing directors, responding in the company’s proxy statement, said the board’s leadership is already reviewed at least once a year by “the independent directors in executive session based on all relevant factors. In addition, the independent members of the board also make an annual determination as to which board member is best equipped to serve as chairman.”

Glass Lewis singled out the Boeing board’s audit committee, which oversees its interaction with regulators, for not taking “a more proactive role in identifying the risks associated with the 737 Max 8 aircraft.” The advisory firm recommended that Boeing shareholders vote against Lawrence Kellner, the committee’s chairman. The former CEO of Continental Airlines didn’t immediately respond to requests for comment.

The accidents, loss of lives and damage to Boeing’s reputation “indicate a potential lapse in the board’s oversight of risk management,” Glass Lewis said in the report.