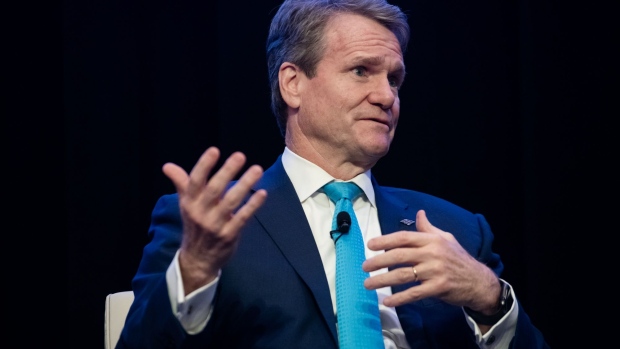 Bank of America Corp., which tops the league table for U.S. leveraged-loan issuance, is watching that market closely for signs of stress.

“The real concern is: Is there too much leverage in the system in certain companies, and if they have trouble, will that impact the economy?” Chief Executive Officer Brian Moynihan said in a Bloomberg Television interview. “We get concerned about that because it usually reverberates back” to banks.

The Charlotte, North Carolina-based lender manages that risk by focusing on debt-underwriting terms, client selection and diversifying its loan book, Moynihan said. In June, he warned that potential “carnage” could ensue in the market that his bank has dominated for a decade.

Bank of America’s market share in U.S. leveraged-loan issuance has remained broadly stable at nearly 11%, even as issuance fell 33% on year. That comes at a time when commentators such as Fitch Ratings have flagged more loans of concern and the potential for an uptick in defaults going forward.

Direct lenders such as hedge funds and buyout firms are snatching business away from syndicated-debt players. Alternative asset managers have made inroads into the US$1.2 trillion leveraged-loan market by often offering speedier financing and more comprehensive structures than the public markets.

As private credit shops have also amassed massive amounts of capital -- with US$296 billion of dry powder globally, according to London-based research firm Preqin -- they’ve been able to finance larger and larger deals.

“For a given deal that they might do a structure, that might be a competitor, but they’re major clients of ours too,” Moynihan said. “On a given deal they may do a tranche of financing that we’d have done, but typically they’re doing a different tranche, honestly, and so we’re more focused on the shorter-term revolvers.”

Here are other takeaways from the interview: