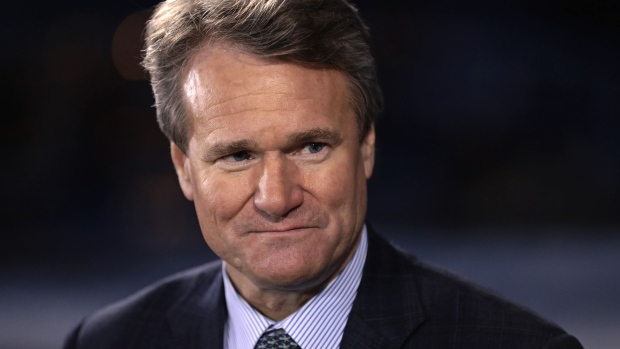 (Bloomberg) -- Bank of America Corp. Chief Executive Officer Brian Moynihan said he has no intention to leave his post, responding to a report that he’s on the Biden administration’s short list to replace Treasury Secretary Janet Yellen if she steps down.

“It’s not on my mind,” Moynihan said Friday on CNBC. “I like what I do and that’s why I’m doing it today.” BofA CEO is “the best job in the world,” he said. Fox Business reported Friday that Moynihan was on a short list to replace Yellen should she decide to leave.

The idea of leaving the private sector for a position in the federal government “has not occurred to me,” Moynihan said in the CNBC interview. Moynihan, 63, has spent nearly three decades at Charlotte, North Carolina-based Bank of America, and been CEO since 2010.

Moynihan attended the White House state dinner last week, a coveted invitation for celebrities and business leaders to brush shoulders with government officials. He’s also been a guest at a roundtable with President Joe Biden and other CEOs on the health of the nation’s economy.

Yellen said last month she intends to stay on as Treasury secretary in Biden’s administration, seeking to put to rest rumors of her departure following the mid-term elections.

“She has no plans to leave,” White House press secretary Karine Jean-Pierre said Friday at a briefing. “That report, to us, seems to be pure speculation.”