Investors seeking to capitalize on economic reopening should look north of the border for a cheaper alternative to the “frothy” S&P 500, according to strategists at Bank of America Corp.

Canada’s S&P/TSX Composite Index has plenty of exposure to commodities and cyclical companies, while also trading at its steepest discount to the U.S. benchmark since the tech bubble more than 20 years ago, equity strategists led by Ohsung Kwon told clients in a note.

The Canadian index trades at 17 times forward earnings, a two standard deviation discount to the S&P 500, BofA said. The valuation gap “is overdone, especially when the composition of the TSX is much better positioned to benefit from the global economic recovery, which we believe is intact,” Kwon said, adding that a discount of that size is usually an omen of TSX outperformance. 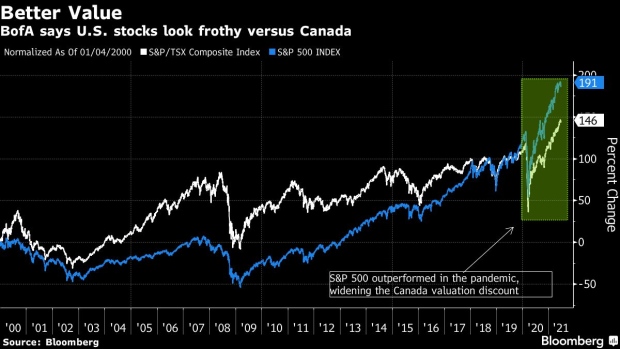 The TSX’s value-stock bias was tested after a rotation back into technology and high-growth stocks last week, though that move has cooled. The TSX has risen about 16 per cent this year, while the S&P 500 has advanced 13 per cent.

Financial stocks, which are 31 per cent of the Toronto index, have been driving the performance, rising nearly 21 per cent this year. Oil & gas equities have also surged as rising demand has pushed crude to more than US$70 per barrel.

“International stocks may be a better way to participate in the cyclical upswing, and Canada looks particularly attractive given its heavy exposure to cyclicals, commodities, and smaller caps,” Kwon said. But potential risks include a more hawkish Federal Reserve -- which could drive up the U.S. dollar relative to the Canadian one -- and weaker-than-expected global growth.