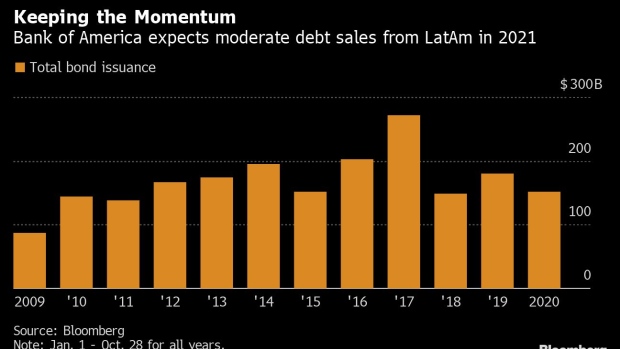 “My message to issuers going into 2021 is come in early, come in large size and come in long-dated,” Volkov said in an interview Tuesday. “In December there could be a rush to issue,” said Volkov, who predicts front-loaded funding by large sovereign borrowers that would typically wait until January.

Governments accounted for about 40% of the $152 billion in new Latin American debt this year, according to data compiled by Bloomberg. Financial institutions were the next largest borrowers, and Volkov expects that to sector to remain active in 2021.

Volkov expects coupons to stay low for the next three to six months, adding an incentive to issue. “Financing costs right now are so attractive,” he said.

Refinancing will be a major driver of 2021 fundraising, with up to $175 billion of corporate Latin America debt and about $60 billion from governments due in the next five years, according to Volkov.

“ESG is a trend that is with us to stay and only gets stronger,” he said. “The number of discussions we’re having with clients is staggering.”

Bank of America has been involved in about 7.3% of this year’s Latin American bond sales, making it the fifth biggest underwriter in the region, according to Bloomberg rankings.