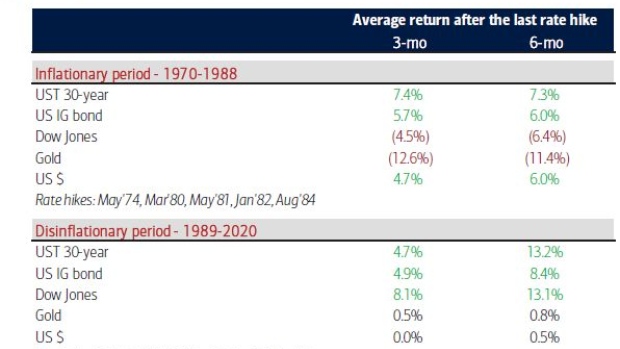 (Bloomberg) -- While investors are impatient for the Federal Reserve to deliver its last rate hike to pile back into equities, history shows they should be wary of doing so while inflation remains persistently high, according to Bank of America Corp. strategists.

An analysis by Michael Hartnett and his team showed that stocks outperformed after the Fed stopped increasing rates during periods of disinflation in the past 30 years. However, during the era of persistently high inflation in the 1970s and 1980s, equities had fallen after the last hike, they wrote in a note. In the current cycle, they expect the Fed to raise rates for the last time in March 2023.

US stocks have already pulled back this week after rallying in the fourth quarter as signs of a resilient economy stoked fears the Fed would remain hawkish for longer, leading to the risk of a contraction next year. About $5.7 billion flowed out of global equity funds in the week through Dec. 7, Bank of America said, citing EPFR Global data.

Citigroup Inc. strategists this week became the latest to warn about weaker returns in 2023, saying the recovery had left valuations looking expensive again. A Bloomberg News survey of global fund managers also highlighted stubborn inflation and a recession as the main risks to stocks in 2023. Still, the majority of respondents were optimistic about low double-digit gains after the worst year for equities since the global financial crisis.

Bank of America’s Hartnett recommends buying assets that perform well against the backdrop of high, but stable, inflation, as well as dips in commodities, banks, small caps and value stocks, and European and emerging-market assets. Investors should avoid tech stocks, private equity and private credit, he said in the note.

Among sectors, consumer and communication services had small inflows, while materials and tech had outflows of $300 million and $200 million, respectively.

--With assistance from Michael Msika.