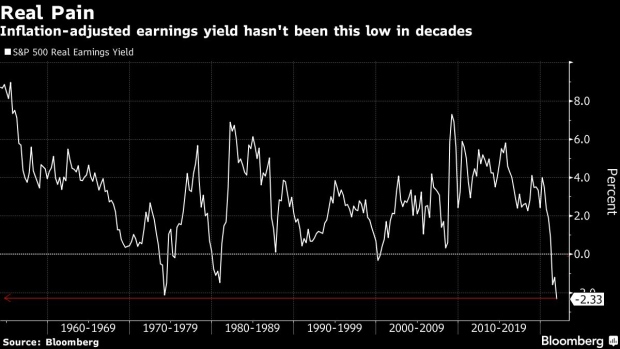 (Bloomberg) -- The real earnings yield on U.S. stocks hasn’t been so low since Harry Truman was president and the Cold War was just starting, according to Bank of America Corp. strategists.

The S&P 500 Index currently has a real earnings yield of -2.9%, meaning that without continued growth in company results, investors would lose 2.9% when adjusted for inflation, the strategists led by Savita Subramanian wrote in a note on Wednesday. “Last time the real earnings yield was this negative was 1947.”

In each of the previous four times that real earnings yield was negative, a bear market was the result, according to the strategists, who advised investors to seek refuge in inflation havens, such as energy, financials and real estate. Expectations that inflation will moderate from 6.2% to 2.5% over the next 12 months may prove too optimistic, as that would imply the sharpest drop in four decades, they said.

BofA has been persistently bearish in its outlook for U.S. and European stocks, even as the main benchmark gauges on both sides of the Atlantic hit successive record highs in recent months. After a brief slump triggered by the spread of the omicron variant of the coronavirus, the S&P 500 has bounced back and is hovering near record highs.

“Negative real earnings yield portends downside risks,” the strategists said, as it undermines the so-called TINA argument that there is no alternative to equities for investors.

According to BofA, the previous four instances of negative real earnings yield were the post-World War II bear market, the stagflation era of the 1970s, the 1980s “Volcker shock” period when the Federal Reserve raised interest rates aggressively to tame inflation, and the 2000 tech bubble.