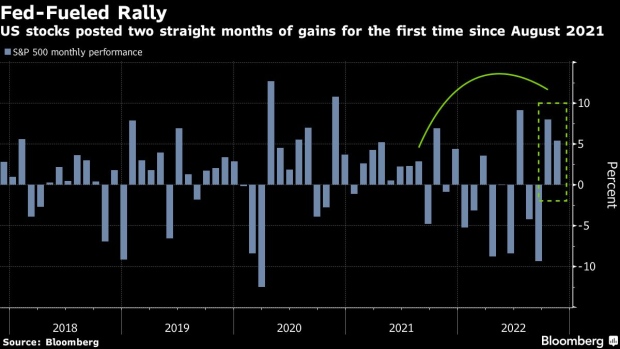 (Bloomberg) -- Stock investors’ optimism around a cooling labor market and a Federal Reserve pivot is overdone, according to Bank of America Corp. strategists, who recommend selling the rally ahead of a likely surge in job losses next year.

“Bears (like us) worry unemployment in 2023 will be as shocking to Main Street consumer sentiment as inflation in 2022,” strategists led by Michael Hartnett wrote in a note showing that global equity funds just had their biggest weekly outflows in three months. “We’re selling risk rallies from here,” he said, reiterating his preference for bonds over equities in the first half of 2023.

Stocks have rebounded in the past two months on bets that the Fed will be able to tame inflation in time to avoid a recession. That was reinforced earlier this week after Chair Jerome Powell signaled the central bank was ready to slow the pace of rate hikes, but data Friday showed employers added more jobs than expected in November, indicative of labor demand that’s still too strong. Contracts on the tech-heavy Nasdaq 100 slumped 2.3% following the report.

Bank of America isn’t alone in its negative stance on stocks. Market strategy teams at JPMorgan Chase & Co. and Goldman Sachs Group Inc. have also warned of further declines early next year amid the specter of an economic recession.

Read More: JPMorgan Strategists Say US Stocks to Sink in First Half of 2023

According to Bank of America’s note, global equity funds had $14.1 billion of outflows in the week through Nov. 30, led by exits from US stocks. About $2.4 billion left global bonds, while cash funds had inflows of $31.1 billion, the note showed, citing EPFR Global data. European equity funds posted a 42nd straight week of redemptions.

By style, US large caps had outflows of $14.5 billion, with small cap, growth and value funds also seeing redemptions. Among sectors, utilities and health care had inflows, while $600 million left financials.

--With assistance from Thyagaraju Adinarayan.

(Updates with US jobs data and Nasdaq futures in third paragraph)