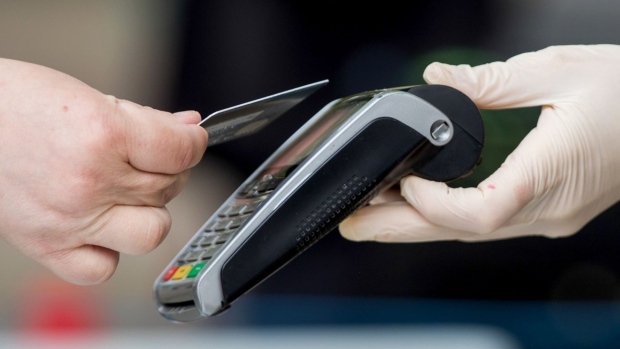 A customer uses a bank card to make a contactless payment on a market stall in Norwich, U.K., on Tuesday, June 9, 2020. With the economy on course for its deepest recession for at least a century, the government is now paying the wages of more than 10 million workers to stave off mass unemployment. , Photographer: Chris Ratcliffe/Bloomberg

(Bloomberg) -- Credit-card spending is slowing down as US consumers feel the impact of rising rents and other increased costs, according to Bank of America Corp.

Spending on credit and debit cards per household increased in July by 5.3% from a year earlier, down from 5.7% in June, Bank of America Institute said in a report Tuesday. That pace lags inflation, suggesting real spending “continues to be under pressure,” economists led by David Tinsley said in the report.

Americans are facing the fastest inflation in decades -- driven especially by higher costs of food, energy and shelter -- which is leaving less money leftover for discretionary purchases. While gas prices dropped last month, rent payments are still historically high, especially for those earning $51,000 to $150,000 a year and among Gen Z, the institute said.

“While wallets are getting squeezed for the 34% of US households who are renters, relief from lower gas prices and retail promotions encouraged consumers to continue to spend throughout July,” Bank of America Institute economist Anna Zhou said in a statement.

Consumers have generally been shifting their spending from goods to services as Covid-related restrictions fade, but goods spending got a boost from promotions like Amazon.com Inc.’s Prime Day last month, the economists said. Services spending also advanced, including fares for airlines, lodging, entertainment and restaurants.

As gasoline prices fell throughout July, a household’s average gas spending as a share of total card spending dropped to 9.3% for lower-income households, down from a peak of 10% in June, according to the report.

Data out Wednesday is expected to show US consumer prices advanced 0.2% in July from the prior month, which would be the smallest increase since January 2021, driven by lower prices at the pump.