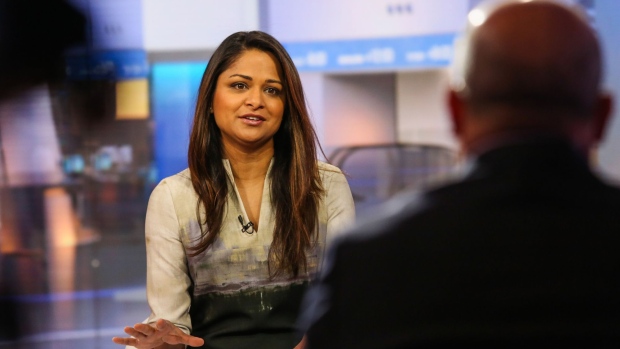 Savita Subramanian, head of U.S. equity & quantitative strategy for Bank of America Merrill Lynch, speaks during a Bloomberg Television interview in New York, U.S., on Monday, Jan. 11, 2016. Subramanian discussed the upcoming earnings season and looked at the sectors that are poised to show strength during the period. , Bloomberg

The bank’s so-called sellside indicator, which tracks the average recommended allocation to stocks by US sellside strategists, remains within two percentage points of a buy signal, its closest since 2017. The indicator rose 56 basis points to 53.3% in November, just as the S&P 500 notched its second consecutive month of gains.

That may not actually be a good thing for stocks as “Wall Street’s consensus equity allocation has been a reliable contrarian indicator over time,” the strategists wrote in a note Thursday. “In other words, it has been a bullish signal when Wall Street strategists were extremely bearish, and vice versa.”

Wall Street had recommended under-weighting equities through the entire bull markets of the 1980s and 1990s, as well 2009 to 2020, the strategists point out.

Currently, the indicator remains in neutral territory, a less predictive range than the buy or sell thresholds, the strategists said. The gauge doesn’t catch every stock market rally or slump, but it has some historical predictive capability for subsequent 12-month S&P 500 total returns, they wrote.

Indeed, a recent buy-side survey conducted by the bank showed that most are expecting a sell-off in the first half of 2023. Respondents said fading inflation and less hawkish central banks could turn things around though with a rebound is expected in the second half.

And its not just institutional investors that are flashing near-term warning signals, JPMorgan Chase & Co. strategists also said recently more pain lies ahead for stocks in the new year.