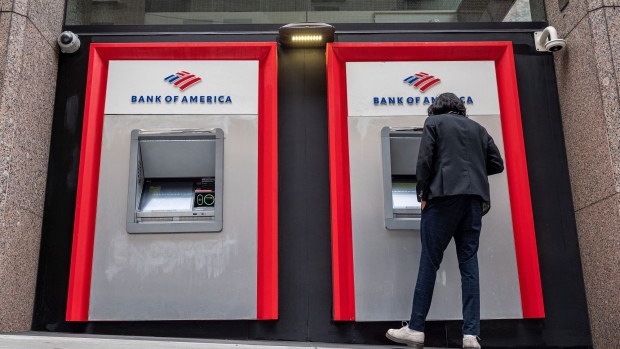 A customer uses an automated teller machine (ATM) at a Bank of America bank branch in San Francisco, California, U.S., on Monday, July 12, 2021. Bank of America Corp. is expected to release earnings figures on July 14. , Bloomberg

(Bloomberg) -- Strategists at Bank of America Corp. are walking back a previous prediction that the US would issue its own digital dollar between 2025 and 2030, saying that the estimate now seems “too optimistic.”

The US is still early in the research and development stage, Alkesh Shah and Andrew Moss wrote in a report Thursday. “An extensive set of complex design choices will need to be discussed before moving into any potential pilot phase,” they said.

Further research and technology development could take years, the Treasury Department said in a recent report on the future of money and payments. The Treasury study was one of several released last week under a March executive order that called for a government-wide strategy for digital assets.

Proponents of a US digital dollar -- also known as central bank digital currency or CBDC -- have argued that it would help preserve the dollar’s dominance as other countries, like China, move forward with their own forms of virtual money. But critics have warned of potential risks, including the possibility for a CBDC to disrupt the US banking system.

“Our view is that it‘s better to be right than first when it comes to CBDC issuance,” the Bank of America strategists said.  “But the digital yuan is already in circulation and a US CBDC issued significantly after a digital euro issuance could potentially pressure the dollar‘s status as the world‘s reserve currency.”

Apart from the Treasury Department, the White House Office of Science and Technology Policy also released two reports last week on a possible US digital dollar -- one looking at the technical aspects of designing a CBDC and another on the US’s policy objectives. Other executive-order reports released last week covered a range of topics from illicit finance to US competitiveness in the digital-asset space.