Investors slashed their exposure to risk assets to levels not seen even during the global financial crisis in a sign of full capitulation amid a “dire” economic outlook, according to Bank of America Corp.’s monthly fund manager survey.

Global growth and profit expectations sank to an all-time low, while recession expectations were at their highest since the pandemic-fueled slowdown in May 2020, strategists led by Michael Hartnett wrote in the note. Investor allocation to stocks plunged to levels last seen in October 2008 while exposure to cash surged to the highest since 2001, according to the survey. A net 58 per cent of fund managers said they’re taking lower than normal risks, a record that surpassed the survey’s global financial crisis levels. 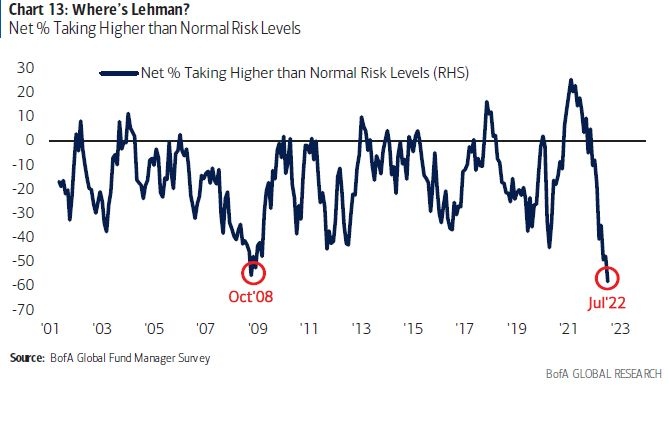 Bank of America’s survey, which included 259 participants with US$722 billion under management in the week through July 15, said high inflation is now seen as the biggest tail risk, followed by a global recession, hawkish central banks and systemic credit events. At the same time, the most investors since the global financial crisis are betting that inflation will be lower in the next year, which means lower interest rates, according to the poll.

The survey’s findings highlight this year’s flight from risk assets, which has sent the S&P 500 Index into a bear market and led European stocks to their worst six-month drop since 2008. Although optimism is brewing again that US inflation could be nearing a peak, sentiment remains subdued with risks around a potential economic contraction remaining high. A looming energy crisis in Europe has also added to the uncertainty. 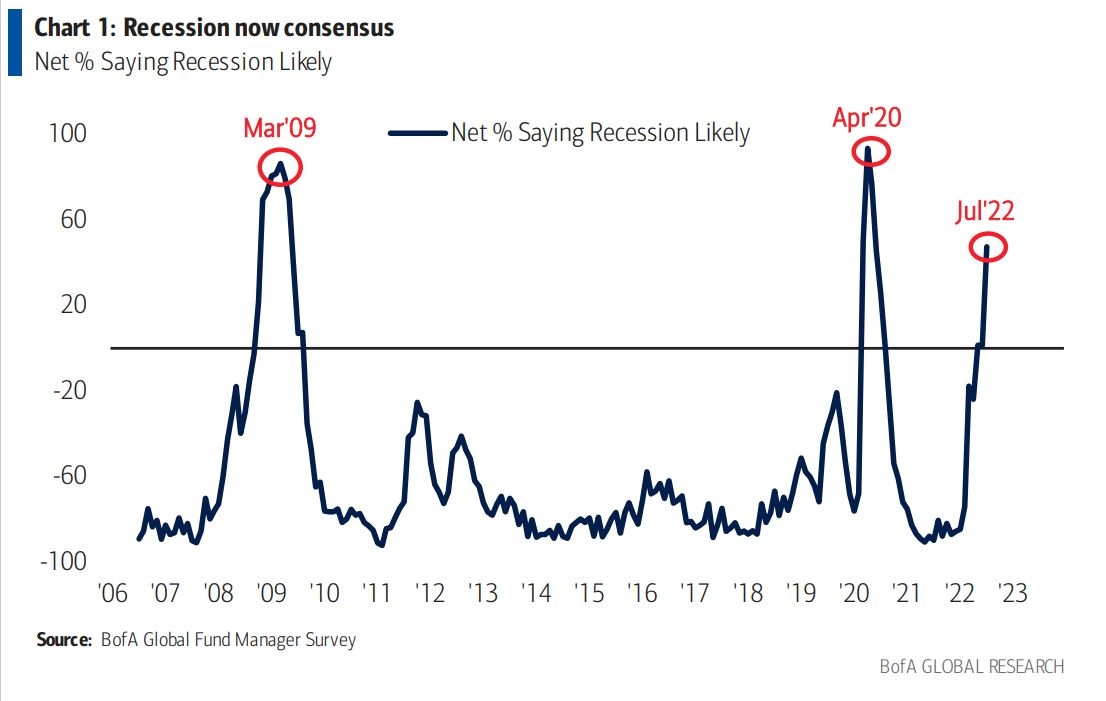 Bank of America strategists said their custom bull & bear indicator remains “max bearish,” which could be a contrarian signal for a short-term rally.

At Goldman Sachs Group Inc. and Morgan Stanley strategists said that any rally in stocks may prove to be short-lived as inflation pressures remain high and a recession seems increasingly likely. Equities have yet to fully price in risks of an economic contraction in the US, they said.

Still, US stocks have been staging a tentative rebound in July after the S&P 500’s worst first-half since 1970. Credit Suisse strategists said in a note investors are expecting a Federal Reserve pivot in the fourth quarter and are beginning to move into growth stocks and looking into cheap cyclicals like autos.

The S&P 500 rose 1.2 per cent  by 9:35 a.m. in New York, while the tech-heavy Nasdaq 100 advanced 1 per cent. Lower volumes after the selloff this year have left the market prone to quick swings, with one measure showing the S&P 500 is on course for its most volatile year since the global financial crisis.