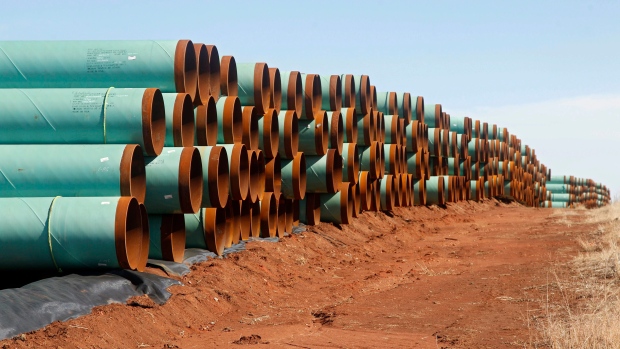 miles of pipe ready to become part of the Keystone Pipeline are stacked in a field near Ripley, Okla. , The Canadian Press

Paramount Resources (POU.TO) founder Clay Riddell is taking aim at political factions looking to disrupt the development of new pipeline capacity. In an interview on BNN, the billionaire oil man said its unconscionable that regional players can disrupt or even stop the development of projects that have been greenlit by Parliament Hill.

“Can you imagine a country, one country, that a part of it won’t let you build a pipeline across their land in order to create wealth for the entire country?” he said. “Big wealth, and big opportunities for the whole country, but you’re not supported [in doing] that.”

Riddell argued there’s an uneven playing field on the pipeline front, with proponents of the projects facing higher legal barriers than those who oppose the projects.

Riddell warned domestic economic growth will continue to be curbed if Canada is unable to bring more pipeline capacity online due to political inaction or interference.

“Ultimately, we can only produce as much oil as we can sell, otherwise it’s counterproductive and drives the price down,” he said. “We will get some pipelines built eventually, whether it’s to the west coast - it’s interesting that it seems to be easier to build a pipeline through the U.S. to the gulf coast to get it to water than it is through our own country: that boggles my mind.”

Barring further pipeline approval, Riddell had a novel approach to share with the government.

“I guess we’ll have a lot of people carrying the oil by pail.”