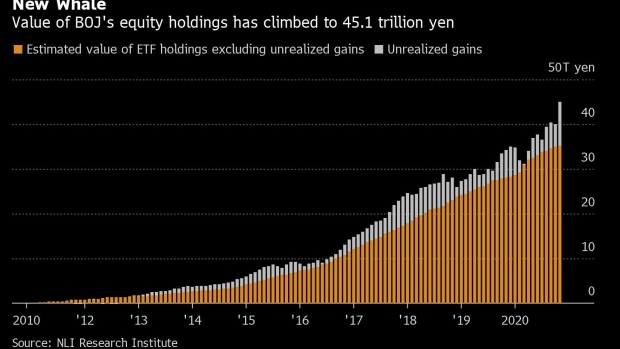 A pedestrian wearing a protective mask walks past the Bank of Japan (BOJ) headquarters in Tokyo, Japan, on Monday, March 16, 2020. The Bank of Japan strengthened stimulus but stopped short of cutting its negative interest rate at an early meeting Monday after the Federal Reserve slashed its own rates to address rapidly mounting shocks from the coronavirus. Photographer: Kiyoshi Ota/Bloomberg , Photographer: Kiyoshi Ota/Bloomberg

(Bloomberg) -- The Bank of Japan has taken over as the biggest owner of the nation’s stocks, with the total value of its holdings climbing well above $400 billion.

Massive exchange-traded fund purchases by the BOJ to support the market amid the pandemic this year combined with subsequent valuation gains pushed its Japanese equity portfolio to 45.1 trillion yen ($434 billion) in November, according to estimates by Shingo Ide, chief equity strategist at NLI Research Institute.

That marks the first time that the central bank’s holdings have eclipsed those of the Government Pension Investment Fund, which Ide estimates stood at 44.8 trillion yen last month, based on gains on top of its holdings as of end-September.

Regardless of which whale is larger, the dominant presence of these two public entities has raised concerns over their influence on market prices. The combination of “a state-run institution, the BOJ, and the country’s representative public pension fund, the GPIF, buying up local equities feels distorted,” said Satoshi Okumoto, chief executive officer at Fukoku Capital Management Inc.

The GPIF, the world’s largest pension fund, increased its equity market presence in 2014 when it doubled its allocation target for local stocks to 25% as part of an effort to increase returns through a shift into riskier assets. The BOJ’s ETF purchases started in 2010 and accelerated later as part of Governor Haruhiko Kuroda’s unprecedented stimulus package aimed at revitalizing the economy.

The BOJ ramped up its support program even further this year as the coronavirus outbreak sent equity markets tumbling, saying in March it could potentially purchase 12 trillion yen worth of Japan ETFs this year, double its annual target. After a few months of heavy buying the pace has slowed back down, and it’s likely the total for 2020 will fall far short of the new theoretical limit.

Even at the current pace, however, “the gap between the BOJ and GPIF’s stock holdings will widen further,” according to NLI Research’s Ide, especially if share prices continue to rise. Amid a global rebound on the back of Covid-19 vaccine developments, the benchmark Topix climbed 11% in November while the Nikkei 225 Stock Average surged 15% in its best month since 1994. That pushed unrealized gains on the BOJ’s stock purchases to over 10 trillion yen at one point in November, according to Ide.

“The BOJ has never taken profits on its holdings and only continues to build its holdings in ETFs,” said Takashi Ito, an equity market strategist at Nomura Securities Co. The GPIF, meanwhile, “has to sell equities when prices are high to adjust the weight of stock holdings within its portfolio.”

NLI Research’s Ide says the BOJ “could face more scrutiny” over whether it needs to continue buying equities when prices are elevated like they are presently. BOJ Governor Kuroda has repeatedly said that the ETF purchases are needed as part of monetary stimulus to reach the BOJ’s inflation target.