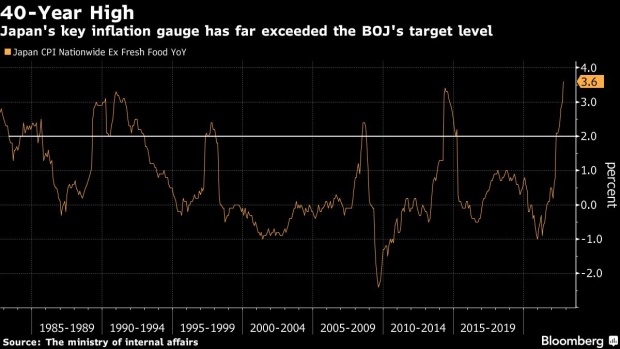 Tamura during the interview on Nov. 30. , Bloomberg

(Bloomberg) -- The Bank of Japan should conduct a policy assessment, and the right moment for it could come soon or a little later, according to board member Naoki Tamura.

“It would be appropriate to conduct a review at the right time, including the monetary policy framework and inflation target,” Tamura told Bloomberg on Wednesday in his first exclusive media interview since joining the board in July. “That moment could arrive soon, or be a little later.”

It’s hard to define the right time mechanically or decide what would make it necessary because it depends on inflation, wages and the economy, he said. Any review should come without any expectations for its result and what may follow after, he added.

Tamura is the first board member to explicitly suggest the need for a policy assessment, after the bank conducted its most recent review in March last year. In the past, review results have often come with policy adjustments, including the introduction of the yield curve control program in 2016. BOJ watchers see review announcements themselves as a potential harbinger for change.

The end of Governor Haruhiko Kuroda’s decade-long term in April has also generated speculation of policy shifts that could come with a changing of the guard. A former BOJ board member and an ex-BOJ chief economist have already told Bloomberg recently that the bank needs another policy assessment in the post-Kuroda era.

Tamura hinted that ongoing public debate over whether the 2% stable inflation target fits in logically with Japan’s society and economic fundamentals are one reason why conducting a review would be appropriate.

The BOJ’s latest board addition said he isn’t necessarily expecting the review to lead to normalization. Japan may not achieve the favorable economic cycle between wage growth and inflation it seeks, he said. That’s even with the current “rare opportunity” of accumulated savings and pent-up pandemic demand in the economy, he added.

“I don’t have any preconceptions,” said Tamura, a former executive for Sumitomo Mitsui Financial Group. “Depending on the result of the assessment, we could have an exit from monetary easing, or it could become clear the policy framework needs to be tweaked. Or we may conclude we need to continue with monetary easing even more persistently.”

Tamura echoed Kuroda on the need to continue with ultra loose policy for now to firmly support the economy. His emphasis was to be humble in assessing economic data and conditions at this critical juncture, when the economy has the potential to enter into a virtuous cycle.

Since an inaugural press conference in July when Tamura said that a positive cycle may be just around the corner, inflation has been stronger than he expected and the momentum is rising for wage growth, he said.

Japan’s inflation has outpaced most economists’ expectations this year. A key gauge for the cost of living rose to a four-decade high of 3.6% in October, and analysts see a further acceleration to around 4% in the coming months.

“I see a higher possibility of an upside surprise for inflation although it’s projected to fall below 2% from next fiscal year,” Tamura said. “Wage growth is the key for sustainable inflation and I think the chance that’ll be higher is rising.”

That signals a slightly more upbeat view than Kuroda, who has emphasized that no stable inflation is in sight. The BOJ’s latest price projections for the next two fiscal years starting in April are both 1.6%, below the key 2% level. Still, in that latest quarterly economic report, the BOJ said inflation risks are on the upside for the first time under Kuroda’s governorship.

If the BOJ decides to proceed with unwinding stimulus as a result of a review, the bank must be highly attentive to risks from the shift in markets, Tamura said. There is a chance that something completely unprecedented could happen, given existing concerns over bond market functions and low liquidity.

“We need to communicate at the right time our exit strategy or our preliminary direction or options concerning a potential exit,” Tamura said. “For stability in the financial markets, it’s important to get market participants to think about how they’ll respond, and prepare.”