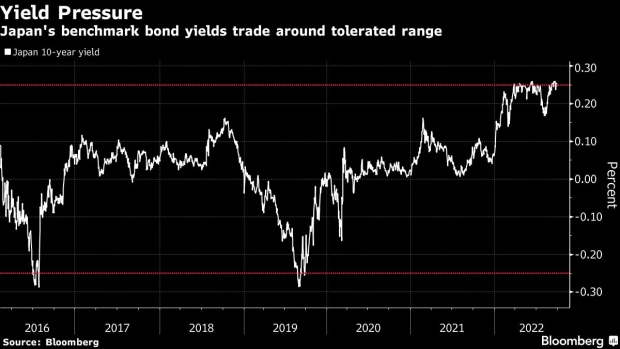 A Japanese flag flies outside the Bank of Japan (BOJ) headquarters in Tokyo, Japan, on Monday, April 25, 2022. Governor Haruhiko Kuroda said the Bank of Japan must keep applying monetary stimulus given the more subdued inflation dynamics in the country compared with the U.S., in remarks on April 22 that omitted any reference to the yen's depreciation. , Bloomberg

(Bloomberg) -- The Bank of Japan boosted bond purchases at a regular operation Friday and said it will step up buying in the coming quarter to cap upward pressure on yields.

The BOJ bought 550 billion yen ($3.8 billion) of five- to 10-year bonds, higher than the 500 billion yen planned, and conducted a daily offer to acquire an unlimited amount of 10-year bonds at 0.25%. It also announced an increase in purchases of bonds with maturities of at least five years for the coming three months.

Like some of its counterparts in Asia, the BOJ is stepping up efforts to counter market volatility as rising interest rates fuel fears of a global downturn. In the case of Japan, some of the pressure on bonds is emanating from bets that the central bank may eventually ditch its ultra-loose stance to narrow the yield gap with its major peers.

“The changes reflect the BOJ’s intention to contain the rise in super-long yields that are dragged higher by the increase in overseas yields, as part of its efforts to correct distortions in the yield curve,” said Mari Iwashita, chief market economist at Daiwa Securities Co. in Tokyo.

Some analysts had predicted the increase in buying for the coming quarter after the BOJ recently ramped up purchases at both regular and unscheduled operations.

The move comes after the 10-year government bond yield climbed to the 0.25% upper limit of the BOJ’s accepted range this week. The yield was at 0.24% Friday.

The authorities have bought about 19.8 trillion yen of bonds through scheduled and unscheduled operations this quarter, compared to around 21 trillion yen in the preceding three months. These amounts exclude unlimited fixed-rate buying operations which the BOJ conducts daily.

The central bank spent more than 16 trillion yen on government bond purchases in June alone -- a record -- to defend its policy.