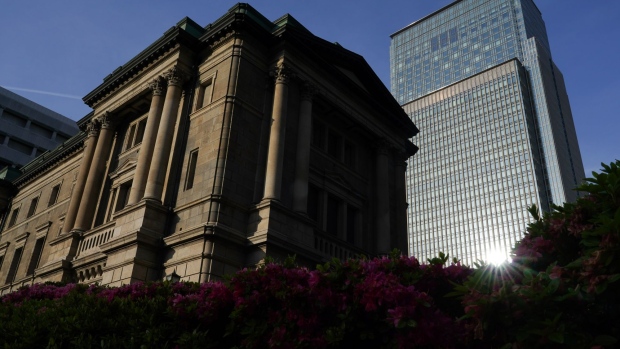 The Bank of Japan (BOJ) headquarters in Tokyo, Japan, on Monday, April 25, 2022. Governor Haruhiko Kuroda said the Bank of Japan must keep applying monetary stimulus given the more subdued inflation dynamics in the country compared with the U.S., in remarks on April 22 that omitted any reference to the yen's depreciation. Photographer: Toru Hanai/Bloomberg , Bloomberg

(Bloomberg) -- The Bank of Japan bought a larger-than-planned amount of bonds at its regular operation on Monday, as the benchmark yield climbed toward the upper end of the central bank’s tolerated trading range.

The BOJ purchased 550 billion yen ($3.8 billion) of five-to-10-year notes. This was a third time its purchases exceeded the original plan of 500 billion yen, and followed unscheduled buying of 150 billion of the same tenors last Wednesday. Purchase amounts for one-to-three and three-to-five year debt were left unchanged at 475 billion yen each.

The BOJ also conducted a regular operation that offered to buy an unlimited quantity of 10-year bonds at a fixed yield of 0.25%. The yield on the benchmark 10-year note rose 1.5 basis points to 0.245%, close to the BOJ’s 0.25% ceiling.

BOJ Governor Haruhiko Kuroda’s insistence on a prolonged accommodative policy, while the US and other developed market peers tighten, has widened the yield differentials between Japan and other major economies. The yen’s slide prompted the government on Thursday last week to intervene and prop up the currency for the first time since 1998.

“What’s behind the BOJ’s increased bond buying is rising volatility across the curve,”said Ataru Okumura, a strategist at SMBC Nikko Securities Inc. in Tokyo. “Investors are probably focused on the possibility that the continued decline in the yen will boost inflation further and pressure the BOJ to tweak policy.”