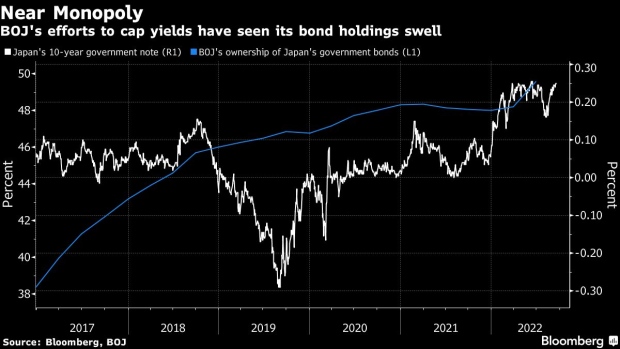 (Bloomberg) -- The Bank of Japan’s yield curve-control policy has gained some extra breathing space after longer-maturity Treasury yields dropped Wednesday due to increasing concern over a global recession.

The BOJ kept policy unchanged at a policy meeting Thursday after the Fed raised its benchmark by another 75 basis points the day before and cut its economic growth projection. Japan’s 10-year yield fell after the decision, easing pressures on the central bank to keep buying the securities in a market under liquidity stress.

“The BOJ’s decision was a bit more dovish than expected, with measures including an extension of part of Covid-funding, which soothed market sentiment,” said Katsutoshi Inadome, a strategist at Mitsubishi UFJ Morgan Stanley Securities in Tokyo. “The drop in US yields is also helpful as investors feel more comfortable buying when yields are falling than rising.”

The functioning of Japan’s bond markets was the worst in two years in the three months through August due to a global debt selloff spurred by rapid Fed tightening, according to a BOJ quarterly survey. The period also covered hedge fund attacks on the BOJ’s yield-curve-control policy in June on bets the central bank would have to tweak its policy.

“The BOJ’s stance and its response to market conditions will remain unchanged, whether US yields rise or fall,” said Mari Iwashita, chief market economist at Daiwa Securities Co. in Tokyo. “It will continue unlimited fixed-rate bond buying operations to cap 10-year yields and use scheduled or unscheduled purchases to contain unwanted rises in super-long yields. If US yields fall, the BOJ can just take a wait-and-see stance.”

The BOJ spent more than 1 trillion yen ($6.9 billion) on its fixed-rate bond-purchase operations on Wednesday alone as the nation’s benchmark 10-year yield held at the upper end of the central bank’s tolerance band of 0.25%.

The BOJ’s massive presence in the Japanese government bond market has caused liquidity to shrink as the central bank tends to boost purchases when yields rise to contain any volatility. Super-long sectors that are outside its yield-curve control have been more vulnerable to global market turbulence, but investors are wary of actively buying amid uncertainty over how high the BOJ will allow them to increase.

The BOJ won’t be fazed if the yen weakens further as a result of its aggressive bond buying, deferring the issue to the Ministry of Finance, which is in charge of foreign-exchange policy, Daiwa’s Iwashita said. “BOJ monetary policy will shift only when the government’s expectation for its role changes.”