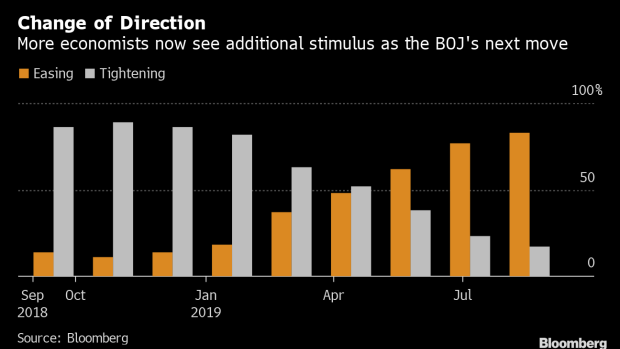 (Bloomberg) -- The Bank of Japan will leave monetary policy unchanged this week as easing trade tensions and calmer financial markets relieve some of the pressure to act, according to a Bloomberg survey.

About three quarters of 48 economists said the BOJ will leave policy unchanged at the end of a two-day meeting Thursday, hours after the Federal Reserve is forecast to cut interest rates. The European Central Bank last week cut rates and revived bond purchases, part of a global policy shift that has raised expectations the BOJ will follow suit.

Still, nearly half of analysts surveyed said the BOJ would add monetary stimulus in some form either this week or at its meeting in October, with the number evenly divided on the timing at 23% each.

A strong and growing majority of BOJ watchers -- 83% in the latest survey -- now see additional stimulus as the BOJ’s next policy step, though they have different opinions on what forms it would take, and even whether certain moves would amount to stimulus.

About a third of those surveyed said the BOJ would strengthen its pledge to keep interest rates extremely low this week, while 21% said it would widen the targeted trading range for the 10-year yield on Japanese government bonds.

Analysts also see a growing chance that the BOJ will lower its negative interest rate on some bank reserves from the current -0.1%, with 23% predicting it would happen by the end of the year. That’s up from 6% in July.

The BOJ has plenty of reasons to be ready. While tensions have eased lately, the U.S.-China trade war looks likely to keep weighing on Japan’s exports, as does a slowdown in the global economy. A sales-tax hike due to take effect in Japan next month raises concerns about domestic consumption.

Risks from the trade war and global economy were cited by 40% of analysts as the BOJ’s biggest worry, with 21% pointing to a strong yen and 19% saying the policy actions of other central banks.

Risk-off sentiment and the global policy shift had pushed the yen to the strongest level since 2016 last month, while the yield on 10-year JGBs touched a three-year low this month. But recent reversals have pushed both the currency and yields within the BOJ’s comfort zones.

Still, acting comes with risks for the BOJ. A slight majority of analysts surveyed -- 53% -- said they thought it was likely that any move would backfire by ultimately demonstrating how depleted the BOJ’s firepower is after more than six years of ultra-aggressive stimulus.

To contact the editors responsible for this story: Malcolm Scott at mscott23@bloomberg.net, Henry Hoenig, Paul Jackson