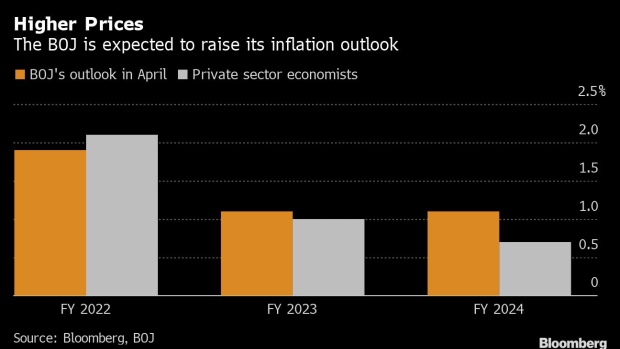 (Bloomberg) -- Japan’s inflation will be stronger and will last for longer than the Bank of Japan expects now, making an upward revision of its price outlook likely later this month, according to a former chief economist at the bank.

“Inflation is going to clearly top 2% this year,” said Seisaku Kameda, who led the compilation of the most recent quarterly forecast in April. “The rapid weakening of the yen is obviously a huge factor.”

Kameda’s prediction suggests the BOJ’s stance on inflation may be coming under more pressure even by its own metrics, as central banks around the world fight runaway inflation. Still, the veteran economist says a revision won’t mean that a policy shift is near.

The BOJ will deliver its latest quarterly forecast on July 21. In recent weeks, its yield curve control program has come under significant attack due to intensified tightening speculation.

While the spread of cost-push inflation is set to drive price gains higher even next year, the bank must be careful in its messaging lest investors see the new figures as a signal that policy normalization is imminent, Kameda said.

“It’s premature to say Japan is seeing the type of inflation the BOJ needs in order to achieve its stable price target,” said Kameda, who became executive economist at Sompo Institute Plus based in Tokyo in May. “Norms don’t shift that easily.”

BOJ Governor Haruhiko Kuroda has said he must continue with easing until wage growth becomes robust enough to make inflation sustainable. Even though Japan’s price gains so far have been significantly lower than other major economies, real wages are already declining.

With Kuroda’s commitment to easing, the yen weakened to a fresh 24-year low last week as traders increasingly priced in a widening policy divergence with the Federal Reserve. That has raised worries among households and businesses already being hit by additional import costs from surging commodity prices.

Since the yen moves are triggered primarily by the Fed, a policy tweak by the BOJ won’t have a meaningful impact, according to Kameda. For a serious attempt at reversing the trend, Japan’s central bank would need to pursue major rate hikes that would wreck an economy still struggling to return to its pre-Covid size, Kameda said.

In April, the BOJ clearly indicated there’s no need for policy tightening by forecasting only 1.1% of price gains in the year starting next April, a slowdown from the 1.9% increase expected this year. With a wave of businesses passing on costs to consumers, inflation could be around 1.5% next year, Kameda said.

At the same time, the central bank will probably have to cut its growth projection for fiscal 2022 following pandemic lockdowns in China, Kameda said. Troubles in Japan’s biggest trading partner have dealt a heavy blow to the economy, he said. Private economists see 2.2% growth this year, compared with a 2.9% forecast from the central bank in April.

So far the recovery momentum from the pandemic appears to have held, and analysts still expect a rebound in the second quarter.