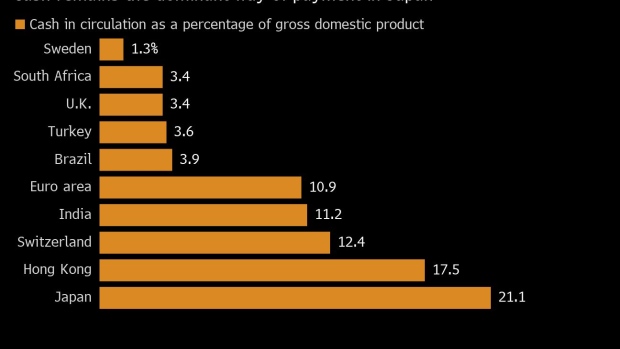 A pedestrian walks past the Bank of Japan (BOJ) headquarters in Tokyo, Japan, on Monday, Sept. 14, 2020. The Bank of Japan left its bond-purchase amount unchanged at a regular operation on Monday. , Bloomberg

(Bloomberg) -- A Bank of Japan move to launch a digital currency would be conditional on public support, according to a senior BOJ official who says no final decision has been made even after the announcement of testing to start next year.

“There is no conclusion yet,” said Kazushige Kamiyama, the head of the central bank’s payment system department and the person in charge of looking into a possible digital yen. “At the end of the day there’s no way we can proceed without gaining sufficient understanding from the Japanese public.”

Should the BOJ issue a digital unit in the future it would aim to enhance the transaction ecosystem and coexist with cash and other forms of electronic payment, rather than being a tool for monetary policy, Kamiyama added.

The comments indicate that while issuance of a central bank digital currency in Japan is not set in stone, the BOJ is keen to deepen its understanding of how one would operate and what conditions need to be met to go ahead with the launch of a CBDC.

China’s plans to issue a digital yuan, while still not fleshed out, have heightened global interest in digital currencies among central banks and policy makers. Talk of planned stablecoins, such as Facebook’s Libra, have added to the sense that regular cash has a growing number of competitors that could have wide repercussions on how the financial sector operates.

Group of Seven finance ministers, the International Monetary Fund and the Bank for International Settlements have all published reports or statements on the topic in the past month. Federal Reserve Chair Jerome Powell said this week about 80% of central banks are exploring the idea of issuing a CBDC.

The BOJ is deepening its research as it looks to improve the efficiency of Japan’s payment systems rather than to enhance monetary policy, Kamiyama said, keeping a distance from the view that digital banknotes could be used to help end deflation.

“We have clearly stated that banknotes and digital currency will coexist,” Kamiyama said. “The digital currency won’t be useful to deepen negative rates because there will be banknotes” to which the rates can’t be applied, he said.

The pandemic has further accelerated the use of cashless payments both in Japan and around the world, showing the growing demand for alternative and more convenient transaction methods.

To widen the access of a possible digital currency, even non-banks like fin tech companies could play an intermediary function, Kamiyama said. Discussions should take place over whether these firms should have accounts with the BOJ, he said.

Kamiyama said the BOJ needed to keep up to speed with the People’s Bank of China moves to become the first major central bank to issue a digital unit.

“It’s not desirable if what China is doing becomes impossible to understand for us,” said Kamiyama. “We must diligently study.”