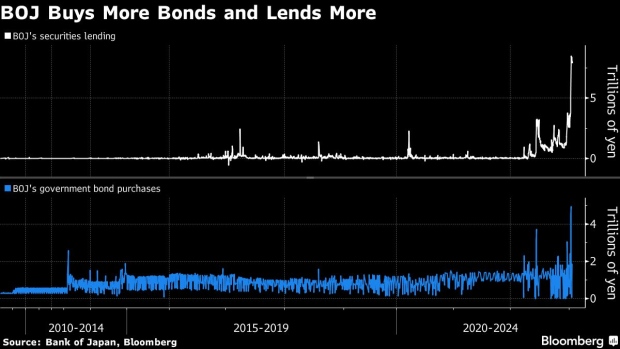 (Bloomberg) -- Japan’s broken bond market continued to throw up anomalies with central bank ownership of some government debt exceeding the amount outstanding, according to its latest data.

There were four such issues among over 300 securities held by the Bank of Japan as of Jan. 20. A bond maturing in March 2030 saw the highest ownership with the BOJ holding ¥7.87 trillion ($60.5 billion) compared with ¥6.86 trillion outstanding.

How the central bank can own more than 100% of a bond is down to double counting. The BOJ lends out securities to alleviate a liquidity crunch in the market, but some of them get sold back to the central bank, resulting in them being counted twice in the ownership data.

In December, the BOJ lifted its policy ceiling for 10-year yields in a bid to improve market functioning but ended up buying more government bonds to defend the new cap. The use of securities lending has been hitting record highs continuously in the past weeks, in what is also a possible sign of short activity in government bonds as traders bet on a further policy shift.

“The situation has been developing in the totally opposite direction” from what the BOJ aimed for, Chotaro Morita, chief rates strategist at SMBC Nikko Securities Inc., wrote in a note. “Regardless of whether it’s March or not, the BOJ will have no choice but to abolish the yield target sooner or later.”

The table below shows the issues with the highest BOJ ownership based on data compiled by Bloomberg.