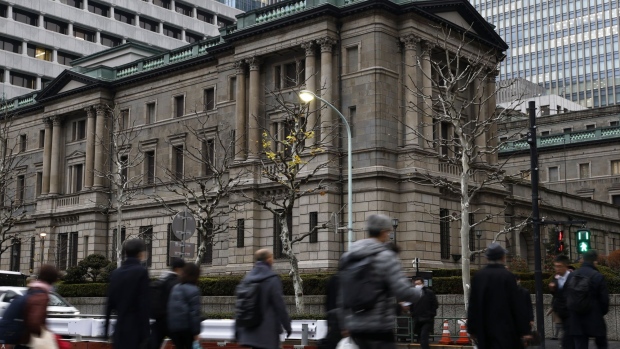 Morning commuters in front of the Bank of Japan (BOJ) headquarters in Tokyo, Japan, on Monday, Jan. 16, 2023. The Bank of Japan will deliver its latest policy decision Wednesday, shortly after its massive easing program came under the fiercest market attack in the history of Governor Haruhiko Kuroda’s decade-long term. Photographer: Kiyoshi Ota/Bloomberg , Bloomberg

(Bloomberg) -- The Bank of Japan indicated it had high hopes its enhanced fund supplying operations will help its yield curve control program, after the latter came under the most intensive market attack under Haruhiko Kuroda’s decade-long governorship earlier this month.

“It is expected that continuing with nimble conduct of market operations while making use of the Funds-Supplying Operations against Pooled Collateral will improve market functioning,” one member said at the January 17-18 policy meeting according to the summary of opinions released Thursday.

Kuroda and his board pushed back against intensified speculation for policy adjustments at the January gathering, by keeping its main policy levers unchanged and doubling down on its defense of the yield curve control program. The BOJ’s 10-year yield target has come down below its ceiling of 0.5% following the decision.

Its hopes for the fund operation shift’s impact suggests the BOJ may not be seeking any major changes to improve market functioning soon, as indicated by Kuroda at a post-meeting press conference.

This month the bank decided to expand the funding program, by allowing itself to determine lending rates for each operation.

The BOJ indirectly encourages third parties to purchase government debt or corporate bonds through the operations. Through it, commercial banks can get long-term loans from the central bank at a rate that’s lower than bond yields. Overall the move helps keep yields low for the BOJ.

The central bank offered ¥1 trillion ($7.7 billion) of five-year loans to commercial banks Monday, the longest term offer for the operation on record. It saw demand of more than three times that figure.

“In addition to the current large-scale JGB purchases, enhancement of the Funds-Supplying Operations against Pooled Collateral is a scheme that contributes to stable formation of the yield curve,” one member said according to the summary.

While those moves suggest little intention for an immediate pivot toward tightening, speculation over policy change is likely to continue as Kuroda nears the end of his term on April 8.

Japan’s inflation at a 41-year high is also a key driving factor for lingering market speculation. Some BOJ board member opinions also suggested that it’s on track for sustainable inflation.

“A virtuous cycle has started to operate somewhat, in which such developments bring about further improvement in profits and additional wage hikes through higher employee engagement and through creating innovation,” one member said.

“It is possible that the significant price shocks since last year stemming from overseas developments will change the norm for prices,” another opinion noted.