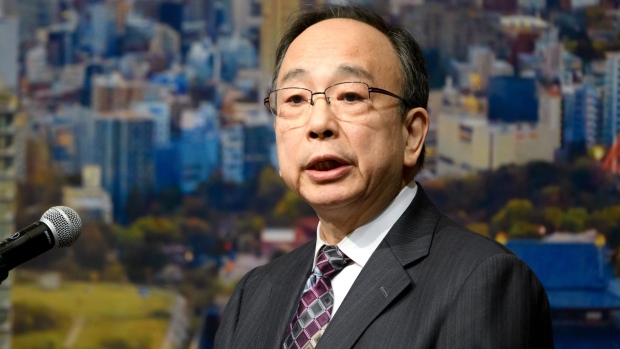 Masayoshi Amamiya, deputy governor of the Bank of Japan (BOJ), speaks during the Asia Securities Industry & Financial Markets Annual Conference in Tokyo, Japan, on Thursday, Oct. 10, 2019. Amamiya said the role of repo markets has been limited overall in Asia and efforts to improve it will lead to greater effectiveness of monetary policy in Asia. , Bloomberg

(Bloomberg) -- Bank of Japan Deputy Governor Masayoshi Amamiya dropped a strong hint that big firms are in less need of funding support, a comment that will likely fuel speculation the BOJ will scale back its pandemic buying of corporate bonds and commercial paper.

Ahead of a policy meeting next week during which the bank is widely expected to discuss whether it will extend the funding program, Governor Haruhiko Kuroda’s right hand man said market conditions for issuing corporate bonds and commercial paper are “extremely favorable.”

Amamiya, who plays a key role in communicating the BOJ’s thinking, didn’t use key phrasing to indicate the bank would extend the program if needed. The deputy governor used that wording a year ago before the bank announced an earlier extension. The exclusion of the phrase suggests that extending the program in any form will be a tougher decision this time.

The BOJ has taken a two-pronged approach in its Covid aid, using expanded purchases of corporate bonds and commercial paper to help bigger businesses and using incentives for private-sector lending to help smaller firms.

Uncertainties over the economic outlook are extremely high and it’s hard to predict how Covid infections will weigh on the economy with the emergence of the omicron variant, Amamiya said.

If the program is extended, those views could be used to justify the decision.