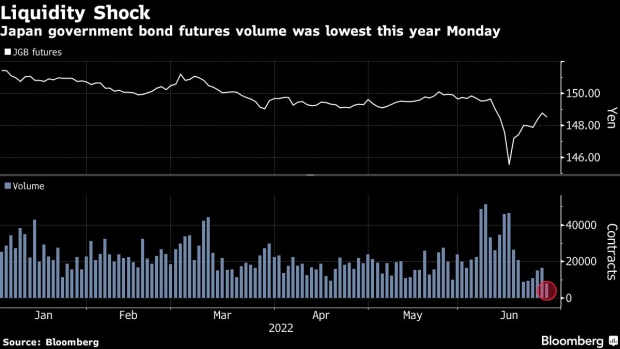 (Bloomberg) -- Liquidity continues to worsen in Tokyo’s fragile bond market amid echos of the Bank of Japan’s robust defense against speculators betting it would tweak yield curve control.

Volumes in front-month Japanese government bond futures fell to the lowest this year in local trading on Monday, more than 60% below the 12-month average, according to data compiled by Bloomberg. The BOJ’s recent move to clamp down on speculative selling has weakened the contracts’ usefulness as a hedging instrument, undermining trading activity.

“The drop in volume is one indication of a decline in liquidity,” said Noriatsu Tanji, chief bond strategist at Mizuho Securities in Tokyo. “Uncertainty over when or whether the basis trade can resume to normal, and whether futures can be used as a hedge for cash bonds or be usable for relative value trades, is restraining activity.”

Japan’s bond market has come under increased pressure from speculators this year who are betting the BOJ will have to change its policy which keeps 10-year yields capped in a bid to boost a stuttering economy. Futures were brought to the brink of a trading halt in mid-June amid a debt selloff, while swaps markets are pricing in a breach to the central bank’s 0.25% line in the sand.

A strategy known as a basis trade -- an arbitrage between futures and their underlying bonds -- blew up last week after a wave of selling in the former led the central bank to suddenly offer to buy unlimited amounts of the latter.

While a semblance of calm has returned to the market following the spike in volatility, investors remained concerned that the dislocation will continue to hurt demand for bonds.

“Some calm in volatility is causing the drop in futures volume but it will take a while for markets to regain confidence in futures,” Tanji said.