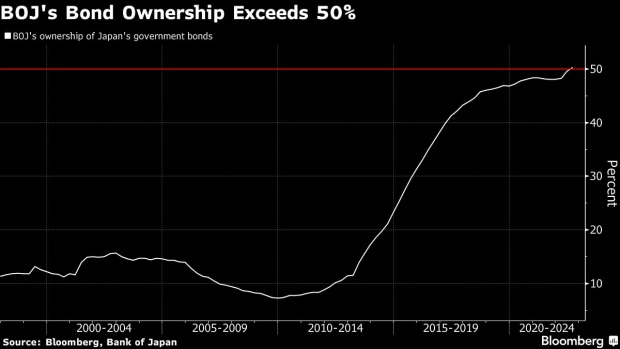 (Bloomberg) -- The Bank of Japan is facing a fresh headache in the dysfunctional local bond market — it has become so illiquid that some securities are being kicked out of an important global index.

Japanese government bonds expiring in March 2032 and March 2024 are among the issues that have been booted out of the World Government Bond Index, according to FTSE Russell, the index compiler. The September 2032 and June 2032 tenors will follow suit next month, it said.

To be eligible for inclusion in the index, bonds should have a minimum outstanding amount of ¥500 billion ($3.8 billion), excluding central bank holdings, according to FTSE’s specifications. The amount is lower for tenors over 20 years, at ¥450 billion.

The problem is relentless BOJ bond purchases in its bid to cap yields have eaten into that minimum requirement, as more and more securities are hoovered up by the central bank.

“The development isn’t a positive thing for Japan’s bonds in the medium to long term,” Shinichiro Arie, chief investment officer at Amundi Asset Management SAS’ Japan unit, said in an interview. “A decrease in an index weight means a decrease in attention from investors.”

A small number of bonds is a drop in the ocean compared with the ¥881 trillion worth of Japanese debt still eligible for the FTSE index. But the exclusion underscores just how the BOJ’s massive purchases are hurting the bond market.

In December, the BOJ lifted its policy ceiling for 10-year yields in a move to improve market functioning but just ended up buying more government bonds to defend the new cap.

Other index providers, such as Bloomberg Index Services Ltd., have different so-called free float requirements, so membership will not necessarily be affected in the same way. An index rulebook from Nomura Holdings Inc.’s Nomura Bond Performance Index has no clause for an exclusion due to BOJ purchases.

The central bank’s ownership of government bonds exceeded 50% for the first time in September. Since then, its aggressive buying has seen the BOJ ‘own’ more than 100% of some securities because of a quirk where bonds it also lends out to support market liquidity can sometimes be counted twice in its holdings.

At its latest meeting, the central bank enhanced a low-interest loans-for-bonds program to encourage commercial banks to buy up sovereign debt.