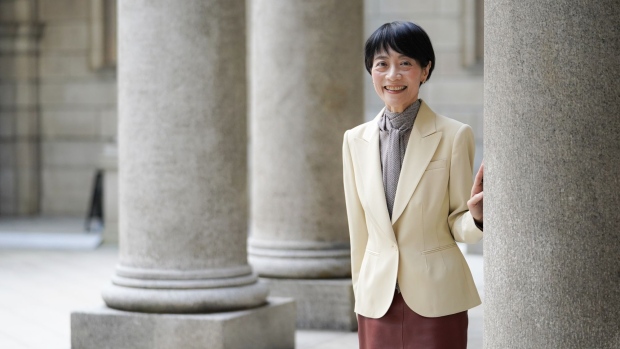 Nakagawa speaks during an interview on Nov. 24. , Bloomberg

(Bloomberg) -- The Bank of Japan’s newest board member said she’s seeing a gradual emergence of upward price trends in the country that bears close watching, even as the bank holds its monetary stimulus in place.

Japan’s consumer prices “don’t look like they will stay around zero forever,” board member Junko Nakagawa said Wednesday in a conversation that was part of her first set of interviews since joining the bank in June. “The upward pressure is strengthening a little.”

Nakagawa’s comments suggest she and her colleagues see Japanese inflation starting to stir again, even as they stick to the view that it will take years for price gains to hit the bank’s 2% target.

Higher energy costs have helped Japan’s key gauge of consumer prices edge up over the last two months for the first in more than a year, but the gains were a far cry from the price jumps confronting other economies and their central banks.

“It’s true that we won’t hit our price goal through fiscal 2023, but the prices of processed foods and other things are rising due to foreign exchange rates and rising oil costs,” said Nakagawa, who was a top executive at Nomura Holdings Inc. before joining the BOJ.

The yen this week dropped to its lowest level against the dollar in more than four years, helping boost exporter profits but also raising the cost of the country’s imports.

Governor Haruhiko Kuroda last month said the yen’s current weakness is “without doubt” good for the economy, but Nakagawa didn’t go quite as far, saying instead that there are both positive and negative impacts.

“What’s most desirable,” she said, “is for the currency to reflect economic fundamentals and move in a stable manner because large volatility in short periods of time is hard to deal with.”

On the question of whether the BOJ might start winding down its crisis program to help fund business hit by the pandemic, Nakagawa echoed recent comments from Kuroda, who this month said credit conditions were improving for big businesses, but some smaller firms were still struggling, particularly in face-to-face services.

“The biggest point is whether economic activity is solid enough to withstand it if we make a change in the program,” Nakagawa said, adding that no decision had been made.