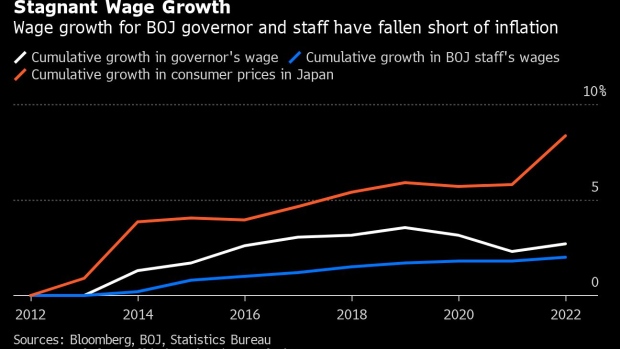 Haruhiko Kuroda, governor of the Bank of Japan (BOJ), speaks at the Paris Europlace International Financial Forum in Tokyo, Japan, on Tuesday, Nov. 15, 2022. The 25th annual forum in Japan features French, European and Japanese financial and business leaders as well as policymakers, including representatives from government and regulatory bodies. , Bloomberg

(Bloomberg) -- Even the men and women working at Japan’s central bank are failing to get the pay raises Governor Haruhiko Kuroda believes are necessary to secure stable inflation.

Base salaries for  Bank of Japan staff members increased by a mere 0.2% in the fiscal year to March 2023, while Kuroda’s own compensation rose by just 0.4%, according to data from the bank. Japan’s core inflation jumped 3.6% in October from a year earlier, the fastest pace in 40 years.

As long as the central bank and other organizations continue to provide only miserly pay gains, the BOJ is unlikely to see evidence of the 3% wage increases it seeks to achieve its price goal and consider a winding back of stimulus.

Economists say it’s politically challenging for the public sector in Japan to set an example when it comes to higher pay.

“Wages of public servants are basically like taxes on the rest of us,” said Koya Miyamae, senior economist at SMBC Nikko Securities. “It’s a bit tricky and politically sensitive to raise their pay when other people are suffering.”

The BOJ governor has stuck doggedly to rock-bottom interest rates, even as global peers hiked, in a drive to generate lasting growth in prices and the economy through a cycle of rising wages. While core inflation has exceeded his 2% price target for seven straight months, wage growth is running at just 1.8%.

Kuroda has said it’s difficult to raise salaries at the BOJ before seeing private companies lift theirs.

The central bank governor’s compensation has risen by less than 3% over that span of the last decade and that of BOJ staff by just 2%, the data showed. Japan’s consumer prices have climbed more than 8% during the same period.

The governor is facing growing dissatisfaction among consumers who are struggling with the higher cost of living, due in part to the BOJ’s easy monetary policy, which has helped weaken the yen to a three-decade low this year.

Kuroda’s annual compensation of 35.2 million yen ($254,000) is about eight times higher than the average wage in Japan.

The softer currency could yet help spur wage growth, according to Miyamae, as it gives unions a pretext for negotiating more aggressively while firms, especially exporters, profiting from the cheaper yen are more willing to compromise.

Still, Miyamae thinks pay will not pick up at the pace sought by the central bank.

“Wages don’t really go up without an increase in the base-salary,” he said. “3% wage increases are not possible at all.”

--With assistance from Wes Goodman.