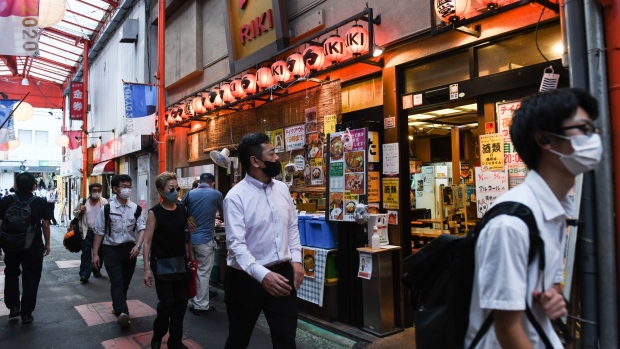 Pedestrians walk by a restaurant in Saitama City, Saitama, Japan, on Monday, Aug. 23, 2021. Japan is facing its worst Covid-19 outbreak since the beginning of the pandemic, as cases spiral out of control and strain the limits of the nations health care system. Photographer: Noriko Hayashi/Bloomberg , Bloomberg

(Bloomberg) -- Japan’s economic recovery will be delayed more than previously expected as the delta variant pushes up infections to record levels, according to a Bank of Japan board member.

“The current spread of infections is more than expected at the time of the July policy meeting,” Toyoaki Nakamura, one of nine members on the board, told reporters in Tokyo. “Downward pressure on the economy is going to continue for the time being.”

Prime Minister Yoshihide Suga looks set to expand Japan’s state of emergency to almost 80% of the economy later Wednesday as he tries to contain the latest wave of cases that has put extra strain on the medical system.

Nakamura said an expected spending uptick built on pent-up demand had failed to emerge in the summer break as surging infections kept consumers cautious. Still, he didn’t signal a need for additional easing steps by the bank as he still sees the mechanics for an economic recovery intact unlike last year.

His comments point to a rising chance of another downgrade of the BOJ’s economic forecast for this year. They also underscore the likelihood that the bank won’t be pulling back from its pandemic stimulus measures for some time to come, even as other central banks discuss tapering or interest rate hikes.