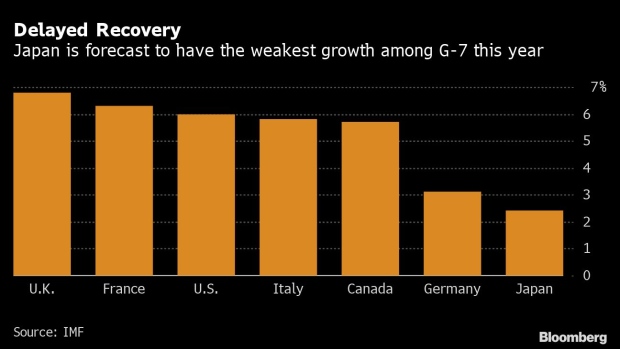 (Bloomberg) -- The Bank of Japan stood pat on its stimulus while signaling more delays in the economy’s post-pandemic recovery, just days before new Prime Minister Fumio Kishida faces his first national election.  While the BOJ kept its interest rates and asset buying plans unchanged Thursday, it cut its projection for economic growth this fiscal year to reflect setbacks from summer’s Covid surge and supply chain problems. It also downgraded its view on exports and production, citing the supply constraints.

The bank’s decision comes amid calls for government spending to support the economy with the nation heading to the polls in a political race centered on issues of income inequality.

Although Kishida’s ruling coalition is likely to keep control in Sunday’s vote, a weak showing may add pressure on the new premier to boost the size of a stimulus package he’s pledged.

The BOJ also slashed its inflation forecast to zero in another indication of how out of sync Japan’s prices are with the rest of the world.

The price downgrade was largely due to a rejigged consumer price basket that puts more emphasis on phone fees, which have dropped sharply under government pressure, making it more difficult to gauge Japan’s underlying inflation trend.

The bank’s forecasts for coming years show that it still expects price momentum to remain weaker than in other countries. The BOJ’s latest projection shows core inflation reaching only halfway to its 2% target by 2023, meaning the bank is likely stuck with its easing for the foreseeable future while other central banks take action.

The Bank of Canada ended its bond-buying stimulus on Wednesday and the Federal Reserve next week is seen announcing a pullback of its bond purchases. A move by the Fed could further buoy the dollar at the expense of the yen, which last week dropped to near a four-year low.

Regardless of whether the ruling party underwhelms in Sunday’s election, analysts don’t see a scenario in which Kishida presses the central bank to change course. Any new spending that adds to the world’s heaviest government debt burden will raise the importance of the BOJ’s role in keeping borrowing costs low.

Governor Haruhiko Kuroda is set to brief the press at 3:30 p.m.

“With the 2% target still so far away, revisions to the inflation outlook are unlikely to have immediate policy implications. But if the BOJ indicates some upside risks to inflation beyond the headline reading, it may be an important signal for future adjustments.”

(Adds forecasts and other details from outlook report)