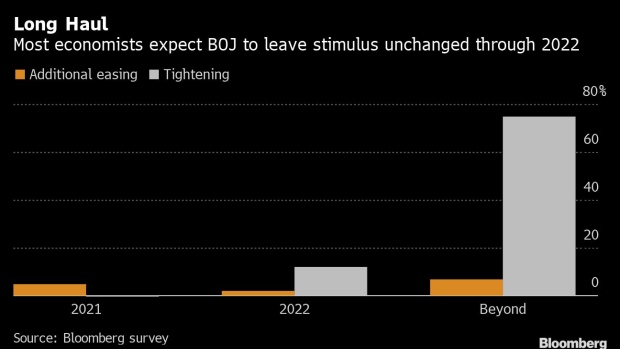 (Bloomberg) -- The Bank of Japan is widely seen standing pat on its key stimulus tools before a ruling party vote next week that will effectively determine the country’s next prime minister.

All but one of 47 economists see the BOJ keeping its negative interest rate and asset-buying targets unchanged Wednesday, a Bloomberg survey shows. The winner of the Liberal Democratic Party’s leadership election is also seen pushing for no immediate change to central bank policy.

Governor Haruhiko Kuroda and his colleagues are likely to flesh out more details of the green lending program they aim to start this year to back businesses tackling global warming.

On its main tools, though, Japan’s weak inflation pulse has the BOJ stuck in a holding-pattern while the Federal Reserve and other central banks start to rein in pandemic stimulus. Just hours after the BOJ gathers, investors will tune into a Fed meeting for clues about its tapering plans.

While the candidates to replace outgoing Prime Minister Yoshihide Suga all signal support for continuity at the BOJ amid the pandemic, some have hinted the bank should eventually take a more flexible approach to its inflation target so it’s not so hamstrung.

Expect Kuroda to reiterate his commitment to the 2% goal and the BOJ’s long-term stimulus, while steering clear of the political race.

With most of Japan’s big cities set to stay under a state of emergency through the end of the month, a key takeaway from the BOJ meeting will be how Kuroda and the board view the economic impact of the country’s summer Covid surge. Some of the board’s nine members have indicated they see the outbreak delaying an already slow recovery.

The BOJ typically releases its policy statement around noon with Kuroda’s press conference following at 3:30 p.m.

“The Bank of Japan will likely keep its policy settings unchanged, but may downgrade its economic assessment as it takes stock of the impact of the outbreak and restrictions.”

What to look for: