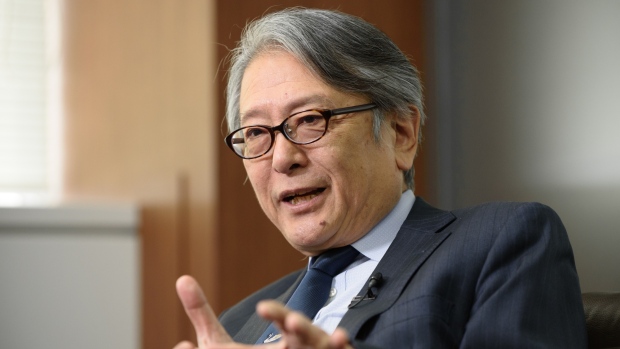 (Bloomberg) -- The Bank of Japan would offer support for a government spending package likely to be unveiled in October when a national sales tax is increased, according to a former central bank official.

The move would have symbolic importance, showing the central bank and government working in tandem to support the economy as it faced the additional risk of the higher tax hitting consumption, Hideo Hayakawa, a former executive director at the BOJ, said in an interview.

The BOJ support would likely take the form of a commitment to buy up extra bonds issued to pay for the government stimulus rather than a change of policy settings, he added. The central bank has plenty of room to expand its purchases of government debt after scaling back its buying to well below half an 80 trillion yen annual target.

“Regardless of how they phrase it, ultimately the BOJ is highly likely to absorb additional JGB issuance from the government,” he said.

Finance Minister Taro Aso said in May that Japan would work toward making it easier to raise the sales tax rather than delaying it, but he denied he was thinking about additional fiscal spending. Hayakawa thinks the government will ultimately decide on extra stimulus that would likely require extra bonds to finance it.

The BOJ would need to carefully assess any extra bond purchases given that 10-year JGB yields have been hovering close to the -0.2% level seen as the lower end of the central bank’s permitted trading range around zero percent.

At its upcoming July BOJ policy meeting, the central bank is also likely to extend the time frame of its promise to keep extremely low rates, ahead of an expected Federal Reserve rate cut, Hayakawa said, echoing the view of another former official at the bank.

Hayakawa’s view is that Japan’s economy is holding up better-than-expected despite slowing global growth exacerbated by U.S.-China trade tensions and a downturn in the tech sector. While the BOJ will want to show its commitment to maintaining its stimulus for longer, the health of the economy doesn’t dictate a need to take further action.

“With the Fed expected to cut rates the day after the BOJ meeting, it might be a little off to do nothing,” said Hayakawa. “For now the environment enables the BOJ to survive comfortably by just tweaking the forward guidance. There’s no need for them to play what little cards they have left in calm waters.”

To contact the editors responsible for this story: Malcolm Scott at mscott23@bloomberg.net, Paul Jackson, James Mayger