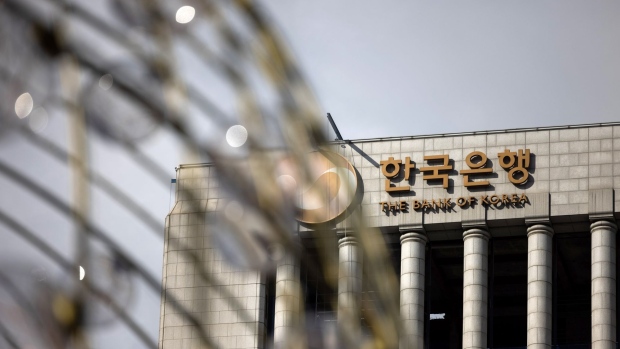 Signage at the Bank of Korea headquarters in Seoul, South Korea, on Monday, Nov. 22, 2021. Bank of Korea Governor Lee Ju-yeol has sent clear signals that he intends to hike rate at the monetary policy committee meeting, scheduled on Nov. 25. Photographer: SeongJoon Cho/Bloomberg , Bloomberg

(Bloomberg) -- The Bank of Korea is ready to provide more liquidity to stabilize short-term money markets if needed, Deputy Governor Lee Sang-hyeong said, as officials seek to head off a year-end cash crunch.

Uncertainty is high as financial institutions typically shift more money around at the end of the year, Lee said in a briefing on Thursday. The BOK would provide the additional infusion via repo transactions, he said.

Although the strains in Korea’s credit market have shown signs of easing in recent days, Lee’s comments underscore the fragility of the recovery. Following the default of a property developer, yields on short-term debt surged to their highest since the global financial crisis.

As part of a bevy of measures authorities in Seoul rushed out to staunch burgeoning meltdown, the BOK said in October it would provide 6 trillion won ($4.6 billion) of liquidity to securities firms and Korea Securities Finance Corp. via repos. Lee’s announcement on Thursday means that sum would increase.

The BOK also plans to conduct two to three repo auctions by the end of this year, starting Monday.

Having risen for weeks, yields on three-month commercial paper clocked in unchanged at 5.54% on Thursday, set for their fifth session without an increase, Bloomberg-compiled data show.

BOK Governor Rhee Chang-yong told Bloomberg in an interview late last month that an improvement to market conditions was likely in the new year when liquidity becomes more abundant.