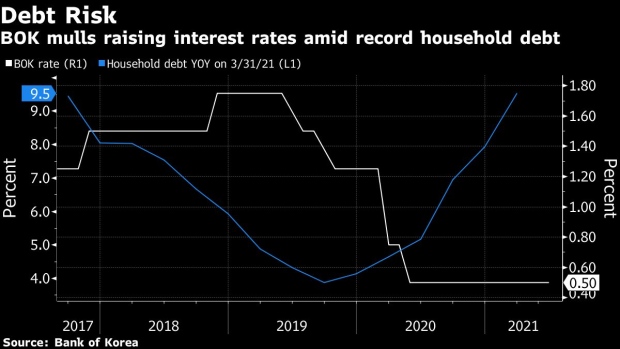 The lone dissenter on the Bank of Korea board who last month called for an interest rate hike appears to have gotten signals of support from others in the seven-member group, according to minutes of the meeting released Tuesday.

The record doesn’t say who was speaking, but does differentiate between the member who called for higher interest rates at the July 15 meeting, Koh Seungbeom, and everyone else.

One of those members said: “The degree of accommodative monetary policy should soon be partly adjusted considering the solid economic recovery is projected to continue while financial risks keep growing.”

Another said the board should consider raising rates “within a few months,” while a third person said the BOK should be careful not to start adjusting policy “too late.”

Dissenting votes from BOK board members are typically seen as an early signal of movement at the bank. The comments from the minutes indicating growing concern over financial risks in South Korea suggest others may be close to wanting to pull the trigger on rates.

Bond traders are pricing in three hikes over the next 12 months that raise South Korea’s key rate from a record low of 0.5% now to 1.25%. The majority of economists surveyed by Bloomberg see the first move coming next quarter.

Because Governor Lee Ju-yeol and his deputy tend to vote together, the board’s balance could shift quickly in favor of hiking. The bank’s next rate decision is Aug. 26.Still, the minutes showed at least one member remained cautious about moving too quickly, saying that discussions could wait until enough vaccines had been delivered. Only 14% of the population has been full vaccinated.

A lot has also happened since the BOK’s July meeting that could increase concerns about the virus. A surge in infections to well over 1,000 cases a day last month forced the government to put half the country under a semi-lockdown, the tightest restrictions yet.

After the July meeting, Lee told reporters that Korea’s financial imbalances have increased the need for higher interest rates, but a hike in August would still depend on the path of the virus.