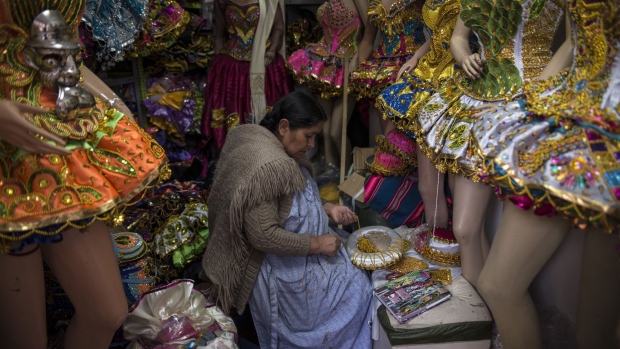 A worker decorates hats for carnival at a store in La Paz, Bolivia, on Wednesday, Feb 22, 2017. The majority of the costumes are sold for the carnival in Oruro where more than 28,000 dancers and 10,000 musicians take part in the procession. According to the Bolivian Ministry of Culture and Tourism, the carnival of Oruro will generate 104.7 million Bolivians into the economy and expects 426 thousand tourists. Photographer: Marcelo Perez del Carpio/Bloomberg , Bloomberg

The company now rates Bolivia one notch lower at B, five levels below investment-grade and on par with Egypt and Costa Rica. The “persistent and sizeable” fiscal deficits have pushed government debt above 60% of gross domestic product and international reserves have fallen, according to a Tuesday statement.

Moody’s Investors Service rates Bolivia five levels below investment-grade at B2 with a negative outlook, while Fitch Ratings assigns it the equivalent score at B. Both S&P and Fitch have a stable outlook on the South American country.