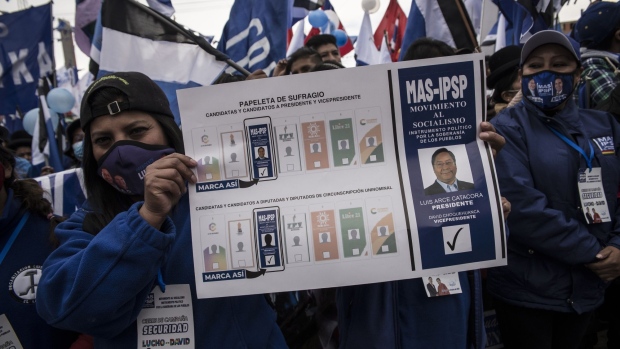 (Bloomberg) -- Bolivians are voting in presidential and congressional elections on Sunday with the socialist movement seeking a return to power a year after their leader Evo Morales was ousted and fled the country.

Morales’s ally Luis Arce, a U.K.-educated economist, is ahead in polls, but needs to avoid a run-off in which voters opposed to his socialist party can unite behind a single candidate.

His main opponent is former President Carlos Mesa, an ex-journalist who led the country from 2003-2005.

Polls are open from 8 a.m. to 5 p.m. and preliminary results are expected Sunday evening.

The vote is the first since last year’s chaotic election, which led to violent unrest and accusations of fraud. Since then, Bolivia has been run by an unelected transition government which Arce and his supporters regard as illegitimate.

Under Bolivian election rules, a candidate can win in the first round with just 40% of the vote, provided there’s a margin of more than ten percentage points over the runner-up. If no one wins in the first round, there’ll be a runoff on Nov. 29.