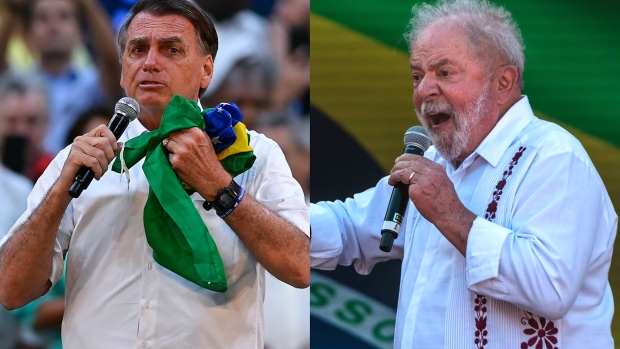 (Bloomberg) -- Brazil’s Jair Bolsonaro was the main target of attacks during a debate marked by the absence of his leftist challenger just eight days before presidential elections.

The right-wing president faced questions about alleged corruption cases in his government and the use of the federal budget to buy congressional support in a debate organized by a pool of local media Saturday evening. Front-runner Luiz Inacio Lula da Silva, meanwhile, was criticized for skipping the discussion.

“Lula didn’t show up because he’s overconfident, he thinks he’s already won,” said Ciro Gomes, who places third in opinion polls and is struggling to stop some of his supporters from casting a strategic pro-Lula vote in the first round of the election. “Or because he can’t explain his unfulfilled promises and corruption allegations.”

On Sunday morning experts and local media described Bolsonaro’s performance as restrained and overall positive for his campaign, but said it would do little to tilt the vote in his favor.

“The debate’s repercussion is minimal, because of its low audience but also the state of the race at this point,” said Josue Medeiros, a political scientist with the Federal University of Rio de Janeiro. “Lula didn’t lose much with his absence.”

Other experts agree about Lula’s absence. “It’s not good for voters when a candidate doesn’t show up. But strategically, the one who’s leading the race usually has more to lose than to win,” said Graziella Testa, a professor at the School of Public Policy and Government at Getulio Vargas Foundation in Brasília.

Bolsonaro tried to fend off attacks from his adversaries by focusing on his Auxilio Brasil program that currently pays 600 reais a month to vulnerable Brazilians, as well as measures to lower fuel prices and to cancel part of student debts. He repeatedly said his government has rooted out corruption.

“This is a government that has a special eye for the most needy,” he said.

Bolsonaro’s focus on social programs is part of a strategy to reduce Lula’s lead among the poor. The former president has 57% of voting intention among Brazilians earning less than two minimum wages, versus 24% for the incumbent, according to a Datafolha poll released Thursday.

During the debate, Bolsonaro received the support of an unusual candidate: a self-declared Orthodox priest replacing former congressman Roberto Jefferson, who was barred from running for his involvement in a corruption scandal. Father Kelmon defended the incumbent on numerous occasions, saying he had “helped the country a lot” and was suffering a concerted attack from all other participants.

Gomes and Senator Simone Tebet, the fourth placed in the opinion polls, also made an effort to dissuade their followers from casting a strategic vote for one of the front-runners, an idea some Brazilians have been considering to resolve the election on Oct. 2.  According to Brazil’s electoral law, a candidate needs more than 50% of the votes to win. If no one gets enough support in the first round, a run-off will be held on Oct. 30.

“Strategic voting is voting with your conscience,” Tebet said.

In an event at a samba school in Rio’s industrial north side, Lula said he wants to participate in a televised debate scheduled for next Thursday, the last one before Election Day.

“I want to take advantage of that space to talk to voters,” he said as he made a push to convince undecided voters, pledging to improve the economy. As part of his campaign schedule for this Sunday, he’s expected to meet with social media influencers.

“When Lula ruled, we could buy groceries and not worry,” said Irene Accioly, a 50-year-old bar owner who joined a crowd at the rally swaying to campaign jingles and shooting Ls into the air with their thumb and index finger, a symbol of support for the leftist leader.

The economy remains one of the main concerns for voters, though their views are improving amid stronger than forecast activity and easing inflationary pressures.

(Updates with candidate comments on next debate on last three graphs)