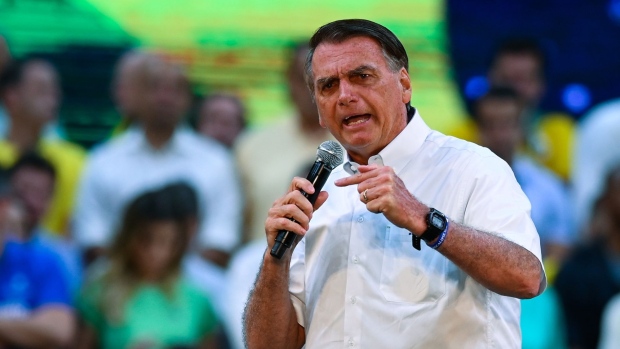 Jair Bolsonaro, Brazil's president, speaks during the National Convention to formalize his candidacy for a second term, at Maracanazinho Gymnasium in Rio de Janeiro, Brazil, on Sunday, July 24, 2022. Bolsonaro officially kicked off his re-election campaign on Sunday, rallying thousands of his followers to Rio de Janeiro, after intensifying his attempts to discredit Brazil's voting system. , Bloomberg

(Bloomberg) -- Brazil’s Jair Bolsonaro tried to snatch the mobile phone of a young man who cursed at the conservative president in front of his home in Brasilia, where he frequently stops to greet supporters.

Video footage published by G1 website on Thursday shows the president leaving his car and lunging at the man who was holding up his phone, apparently to shoot a video, while hurling insults at the leader.

The president, who’s up for re-election in October, grabbed the man by the arm and collar before bodyguards intervened, throwing the heckler to the ground.

Bolsonaro’s office didn’t immediately respond to a request for comment.