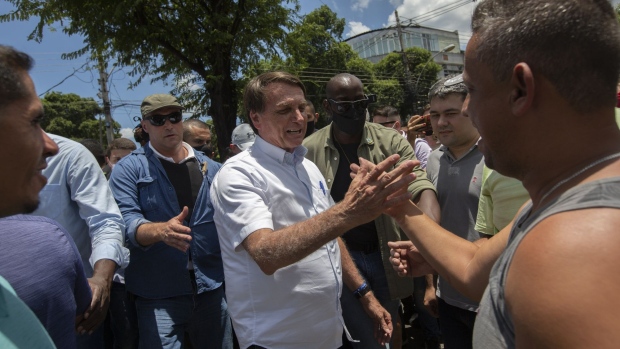 Jair Bolsonaro, Brazil's president, center, greets an attendee after casting his vote during the second round of the municipal elections in Rio de Janeiro, Brazil, on Sunday, Nov. 29, 2020. Bolsonaro is following the advice of his closest advisers to remain discreet and not support any candidates in the second round, after most of the candidates he backed in the first round were defeated. , Bloomberg

(Bloomberg) -- President Jair Bolsonaro announced that Brazil may soon eliminate the mandatory use of face masks by those who were vaccinated or already infected by Covid-19, drawing the rebuke of medical experts who consider the measure too early for a country that has inoculated only one quarter of its population with an initial dose.

The president said on Friday he had requested his health minister to prepare a study to ease those rules and added: “For how long are going to be hostage to masks?”

Health Minister Marcelo Queiroga said nothing has been decided yet.

“I received from the president a request to study the use of masks,” he said in a video posted on social media shortly after Bolsonaro’s statements. The minister, who has repeatedly defended the use of face masks and donned one in the video, added that the president was “very satisfied” with the arrival of more vaccine doses.

The pandemic in Brazil, which has already killed close to half a million people, has shown few signs of slowing. More than 88,000 new cases and 2,504 deaths were reported in the past 24 hours. The vaccine rollout has been slow and troubled: a congressional inquiry into the lag in shot delivery has pointed to mismanagement by the administration during negotiations for the purchase of shots.

Read more: Brazil Let 70 Million Shots Get Away and Sealed Its Covid Fate

Health experts warned that, while vaccines protect those who got them from getting extremely sick, they are less effective in avoiding that they become contaminated by the virus and spread it to others.

Restrictions such as social distancing and mask use have been inconsistent across the country. Some smaller towns in Sao Paulo state have enforced complete lockdowns, while bigger cities like Rio de Janeiro have gradually let restrictions slide.