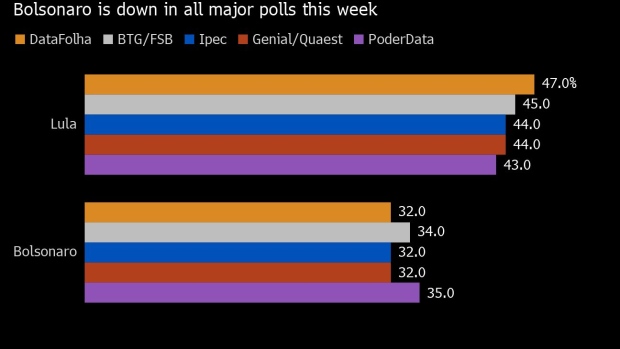 (Bloomberg) -- President’s Jair Bolsonaro’s managed to lift his popularity slightly among voters after a multibillion-dollar blitz to stimulate the Brazilian economy ahead of general elections, according to the latest DataFolha poll.

His top challenger, former President Luiz Inacio Lula da Silva, would win 47% of votes in the first round, unchanged from the last survey taken at the end of July. Bolsonaro would get 32%, up from 29%.

With just six weeks to go before Brazilians head to the polls, Bolsonaro is banking on a 41.3 billion-real ($8 billion) aid package to improve his standing. Relief money, including expanded cash subsidies for poor, began flowing last week, but other major opinion polls released over the past few days have shown the incumbent’s numbers stagnating.

While political observers say the race should tighten as campaigning gets underway and more relief is dispersed, DataFolha is the first pollster to find Bolsonaro making inroads.

Since Brazil’s top court tossed out graft convictions against Lula last year and enabled him to run for a third term, the 76-year-old leftist leader has been the heavy favorite.

Annual inflation running at over 10% has left many Brazilians tightening their belts and doubting Bolsonaro’s stewardship of Latin America’s largest economy.

DataFolha interviewed 5,744 people in 281 different cities across Brazil between Aug 16 and 18. The poll has a margin of error of plus or minus 2 percentage points.