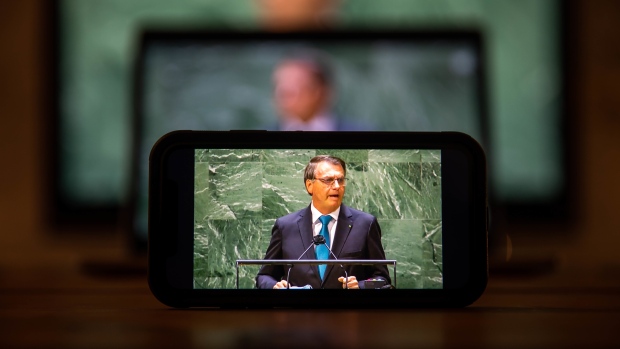 “We are a rich country,” Bolsonaro told a crowd of supporters on Tuesday in an event in the northeastern state of Bahia, one of the country’s poorest. “We can serve those most in need for a little longer.”

The plan under discussion is to provide assistance to those who won’t be eligible for a new social program that Bolsonaro intends to launch after emergency cash handouts end in October, said two people with knowledge of the matter. The idea is for the monthly aid to hover around 300 reais ($55), the same amount currently being paid, one of the people said, asking not to be named because discussions are private.

Additional cash handouts are part of a bigger plan that Bolsonaro is putting in motion to informally kick off his campaign and improve re-election odds, according to two other people close to the president. This week, the conservative leader is visiting cities in four of the country’s five regions to defend his government, announce infrastructure works and deliver land titles to poor families.

He’s also talking up the country’s economic recovery, while acknowledging that inflation is a problem that he blames on political adversaries. At the same time, he continues to seek the support of financial markets, saying he won’t give in to congressional pressure to spend more, nor will he intervene in fuel prices that have been eroding purchasing power.

Bolsonaro is seeking to increase and rebrand Bolsa Familia, the social program that’s become a mark of the administration of Luiz Inacio Lula da Silva, one of his main political rivals. Yet his administration has struggled to do so without breaking a rule that limits the growth of public expenditure to inflation. Covid cash handouts, on the other hand, could be paid for with extraordinary funds approved by congress.

The government has extended Covid aid a few times, with less generous terms, since introducing them last year. They have so far cost public coffers 335.6 billion reais ($61.5 billion), according to the citizenship ministry.

Another extension of the program faces opposition by the economic team, according to Treasury Secretary Jeferson Bittencourt.

“An extraordinary solution for social expenses isn’t adequate,” he told reporters on Tuesday, adding that any new social program will need to find sources of financing. “Social problems must be corrected the right way.”