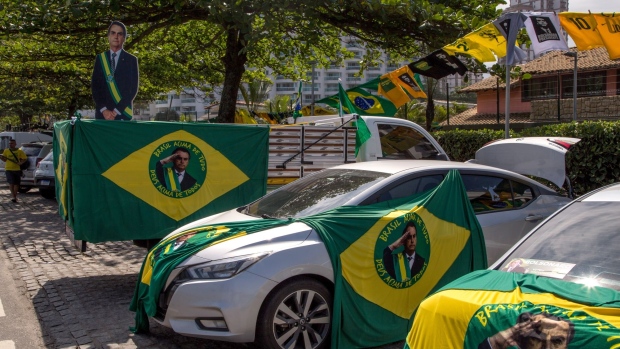 (Bloomberg) -- President Jair Bolsonaro and his leftist rival Luiz Inacio Lula da Silva are in a dead heat in Brazil’s election Sunday with 73% of the vote counted, a stronger-than-expected showing by the incumbent that points to a likely run-off between the two on Oct. 30.

Lula has 46% of the votes compared to 45% for Bolsonaro, a far-right former army captain, the electoral court said as of 8:10 p.m. in Brasilia. Even if Lula has overtaken the president as votes from the northern states that are his bastions come in, it may not be enough to deliver him the 50% he needs for the first-round victory some opinion polls had pointed to.

Carlos Melo, a political scientist at the Insper University in Sao Paulo, said initial results showed the strength of Bolsonaro’s base.

“All that is certain is that the far-right is extremely strong. And Jair Bolsonaro goes into the second round in a position of strength,” he said.

Electoral officials said the vote on Sunday had been largely peaceful. Bolsonaro, 67, has repeatedly cast doubt on the integrity of electronic voting without providing evidence to back his assertions. Lula, 76, is seeking a third term in power after his stint in office from 2003-2010, which was followed by a jail term on corruption charges he disputed.

(Updates with latest results from the lead.)