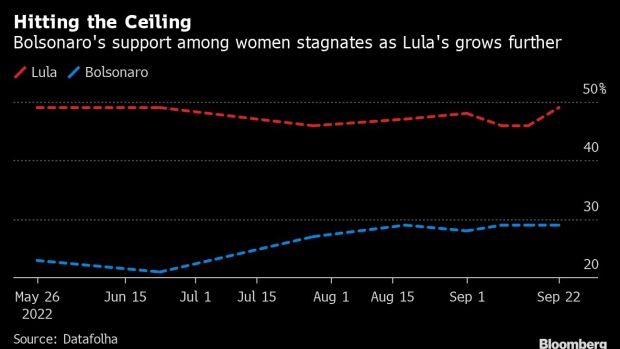 (Bloomberg) -- President Jair Bolsonaro’s efforts to reduce his rejection among women are falling flat, posing a major obstacle to his re-election bid just nine days before Brazilians go to the polls.

The former army captain, known for his macho bravado and embrace of traditional family values, has plateaued with just 29% of the female vote, according to a widely-watched Datafolha poll published late on Thursday. His leftist challenger, Luiz Inacio Lula da Silva, saw his support among them grow to 49% in the same survey.

Women make up about 52% of the Brazilian electorate. In 2018, a slight majority of them gave Bolsonaro a vote of confidence, according to exit polls. Since then, however, their support for the conservative leader slumped as they disapproved of his government, particularly his botched handling of the pandemic and his pro-gun policies.

Advised by marketing professionals, the president has been trying to soften his rhetoric to win over female voters. It worked briefly, with Bolsonaro’s image among women improving in July after he launched his re-election bid hand-in-hand with his evangelical wife at a large televised event in Rio de Janeiro.

The so-called “first-lady effect,” which resonated more with evangelical women, has apparently run its course: Bolsonaro has remained stuck with the same level of female support since September, according to the past three Datafolha polls.

Hurting that marketing strategy was the president himself: He attacked a female journalist during a televised debate in August and made cringe-worthy comments about his sexual performance right after kissing his wife at a major campaign rally in September.

At an event organized by female supporters that same month, the president defended his pro-gun policies over the landmark Maria da Penha law that punishes men more severely in cases of domestic violence.

“Do you prefer a law or a gun to protect yourselves?,” he asked at the event in the Southern state of Rio Grande do Sul, his stronghold.

Women who vote for Bolsonaro are usually Christian evangelicals who support conservative and traditional family values, and who despise the feminist agenda, said Deysi Cioccari, a political science professor with the Pontifical Catholic University of Sao Paulo.