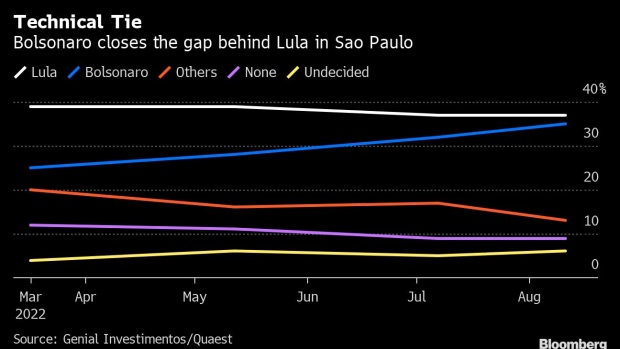 Jair Bolsonaro, Brazil's president, speaks during the National Convention to formalize his candidacy for a second term, at Maracanazinho Gymnasium in Rio de Janeiro, Brazil, on Sunday, July 24, 2022. Bolsonaro officially kicked off his re-election campaign on Sunday, rallying thousands of his followers to Rio de Janeiro, after intensifying his attempts to discredit Brazil's voting system. , Bloomberg

(Bloomberg) -- President Jair Bolsonaro is statistically tied with leftist rival Luiz Inacio Lula da Silva in Brazil’s most populous state after the incumbent backed a flurry of measures to ease economic hardship, according to a new poll.

The survey by Quaest shows Lula winning 37% of first-round voter intentions in Sao Paulo, and Bolsonaro closing in with 35%. The challenger’s lead falls within the poll’s margin of error.

With a population of over 44 million people, the state of Sao Paulo is a top electoral prize for presidential contenders and a potential harbinger of national trends. Political analysts are currently closely watching to see if recent tax cuts that lowered fuel prices and a multi-billion dollar aid package will boost Bolsonaro’s standing ahead of October’s vote.

Most major national surveys show the incumbent trailing Lula by about 10 percentage points. But the new government assistance program, which includes expanded cash handouts for the poor, began being dispersed this week.

Read More: Bolsonaro Is Stepping Up His Radical Rhetoric in Election Run-Up

While Lula’s popularity has remained relatively stable in Sao Paulo, which includes Brazil’s financial hub as well as vast swaths of farm land, Bolsonaro’s climbed 10 points since March, Quaest found. During the 2018 election, the former army captain won by a landslide in the state

The poll, commissioned by Genial Investimentos, interviewed 2,000 people across Sao Paulo state between August 5 and 8, with a margin of error of plus or minus 2 percentage points.