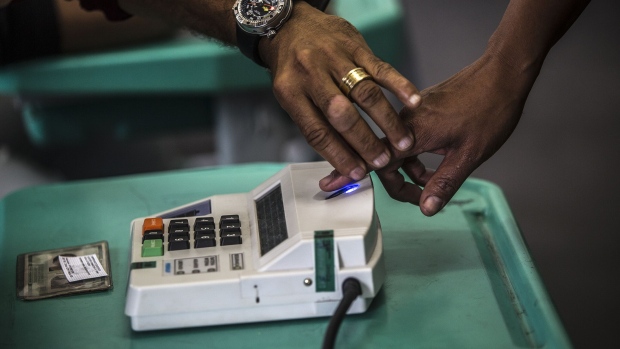 A voter scans a finger while registering to cast a ballot at a polling station during the first round of presidential elections in Rio de Janeiro on Sunday, Oct. 7 2018. , Photographer: Dado Galdieri/Bloomberg

(Bloomberg) -- President Jair Bolsonaro doubled down on his criticism of Brazil’s electronic voting system, presenting a series of conspiracy theories and debunked Internet videos as evidence that elections are vulnerable to cheating.

During a nearly two-hour address late on Thursday, the far-right president attacked the electoral authority, which has requested he provide evidence of his repeated claims of voter fraud. Bolsonaro said that while he didn’t posses proof, paper ballots are still needed to safeguard elections next year.

“For those who accuse me of not presenting evidence, I return the charge: Present proof that its not fraudulent,” he said during his weekly social-media broadcast.

Among the allegations, a Bolsonaro aid aired a long-disproved video of a programmer showing how to write code that would hack Brazil’s electronic-ballot software. Electoral authorities maintain that, in 13 general and municipal elections held since the electronic voting system was introduced, there has been no proven instance of fraud.

Bolsonaro is currently backing a bill in congress that would require printouts of each vote cast in next year’s presidential elections. But party leaders in congress have signaled they will block the bill on the grounds that Bolsonaro is trying to upend the democratic process.