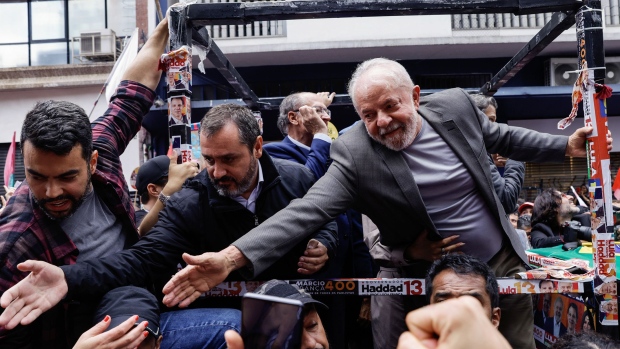 (Bloomberg) -- Brazilians voted in general elections marked by a polarizing race between conservative President Jair Bolsonaro and his leftist challenger Luiz Inacio Lula da Silva, who some pollsters say could attain an outright victory on Sunday.

Polling stations closed at 5 p.m. and with just over 5% of the votes counted, Bolsonaro was leading Lula, as his rival is known, by 49% to 42%, according to Brazil’s electoral court early count which was most advanced in states leaning in favor of the president. Nearly 160 million voters also chose state governors, lower house representatives and senators.

The election took place in a calm way, according to top Justice Alexandre de Moraes, the head of the country’s electoral authority. “There has been nothing out of the ordinary,” he told journalists before voting ended.

Moraes said voting abroad increased over 50% in comparison with the 2018 election, with almost 700,000 Brazilians registered to vote in other countries. He added that abstention is likely to stay near the same level observed in the previous elections.

While nine other contestants are running for the country’s top job, the election has become the ultimate battle between two polar opposites of Brazilian politics: Bolsonaro, a former army captain who won by a landslide in 2018 but saw his popularity plunge in the aftermath of the pandemic; and Lula, who ended two presidential terms with an approval rating of nearly 90% before having his reputation tarnished by a major corruption scandal.

They both held rallies over the past couple of days, after going on the attack during a presidential debate that political analysts saw as having little impact on voting intention. Lula is currently in Sao Paulo, where he cast his vote, while Bolsonaro voted in Rio de Janeiro before heading to Brasilia to wait for the results.

“With clean elections, no problem, may the best win,” Bolsonaro told journalists before voting. Asked if he would recognize the election result, the incumbent didn’t answer.

Lula recalled he couldn’t vote in the last election because he was in prison accused of corruption. “Four years later I am voting here with recognition of my total freedom and with the possibility of being president of this country again,” he told reporters.

Long lines of voters were seen in many Brazilian cities throughout Sunday. In Rio, the streets were quiet with most shops and restaurants closed, but voting stations were buzzing. Brazilians snapped selfies with friends and family after casting their ballots, and passers-by shouted the front-runners names, “Lula” or “Bolsonaro,” to whip up crowds.

The election will have profound implications for Brazil’s economy, democracy and the country’s relations with the world. Whoever wins will have to respond to growing popular demand for social spending and at the same time convince investors that the government will be fiscally responsible.

Bolsonaro, 67, has promised to remain committed to a liberal agenda of privatizations and deregulation. Lula, 76, would strengthen public banks, boost the role of state-own oil giant Petrobras in fuel production and launch a major infrastructure program. None of them has been specific about how to deliver on promises.

Latin America’s largest economy has mostly recovered from the pandemic, bolstered by stimulus measures that have yet to translate into meaningful support for the incumbent president. The central bank estimates growth to accelerate to 2.7% this year, before slowing again in 2023 following an aggressive monetary tightening campaign that has helped to bring inflation back to single digits from more than 12% in April.

Local markets have mostly shrugged off the election this time around, with some notable exceptions. They have rallied when Lula announced centrist politician Geraldo Alckmin as his running mate and when former central bank chief Henrique Meirelles endorsed his candidacy. But an outright victory by the ex-president could prompt a negative knee-jerk reaction as traders worry that it would reduce pressure on the former union leader to adopt more market-friendly policies.

Another concern is whether Bolsonaro would reject the election result should he be defeated, and particularly how his supporters would react if the he alleges voter fraud. Such worries aren’t baseless: the incumbent has repeatedly cast doubt on the integrity of Brazil’s electronic voting system, criticized electoral authorities and opinion polls, saying he will win in the first round with at least 60% of the votes.

(Updates with early count of results in second paragraph.)