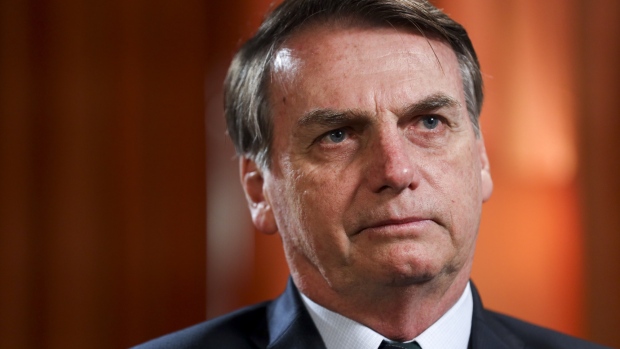 (Bloomberg) -- As Europeans threaten to block access to Brazilian exports over President Jair Bolsonaro’s environmental policies, some of the agribusiness players loyal to the former Army captain are starting to fret about the consequences of his rhetoric.

French President Emmanuel Macron issued the most explicit ultimatum yet to Brazilian commercial interests on Friday, stating that France would oppose the trade deal between the European Union and Mercosur, the South American customs union, in retaliation to Bolsonaro’s hostility to tackling climate change. While ratification of the deal is still a long way away -- and German Chancellor Angela Merkel does not share Macron’s position -- Brazilian exporters are uneasy.

“You’re starting to see an expression, a movement of people who represent the sector, and it doesn’t seem like just a hypothetical threat,” Rubens Ricupero, former finance minister and former secretary-general of the U.N. Conference on Trade and Development said. “These are people who have a sensitivity to exports, not a sensitivity for the environment.”

Unswerving defense of farmers in Brazil’s heartland along with a pledge to slash environmental regulations to unlock the Amazon’s productive potential helped lift Bolsonaro to the presidency. With the world’s largest rainforest ablaze, prominent representatives of the sector are sounding the alarm, saying farmers’ hard-won reputation for sustainability is in jeopardy and, in turn, their exports to conscientious consumers. Among lower-house lawmakers from the farm caucus surveyed by Ibope this month, 80% think illegal deforestation is already hurting Brazil’s image and business.

Finland, which currently holds the presidency of the EU, even raised the idea of banning Brazilian meat imports on Friday in response to Bolsonaro’s lax stewardship of the Amazon.

The European Union ranks second only to China as the final destination of Brazil’s agriculture exports, and accounted for 16% of the shipments in 2018. Brazil exported $13.6 billion in agricultural products to the region last year.

Roberto Brant, the agriculture confederation’s president and a former lawmaker, called on producers to loudly counter Bolsonaro’s damaging statements. And Senator Katia Abreu, a former agriculture minister, said she’s very afraid Brazil will lose European markets. “Farmers are being deceived,” she told Estado de S. Paulo. “They may be happy today, and they will be crying tomorrow.”

Soybean traders signed the Brazilian Soy Moratorium in 2006, pledging not to buy soybeans from deforested areas. But some exporters believe Bolsonaro’s decision to blame NGOs for the fires in the rainforest may lead importers to require certifications to import Brazil’s soy products if the situation over the Amazon deteriorates, according to an industry representative speaking on condition of anonymity. Some buyers may prefer purchasing soy-meal from rivals Argentina and U.S, the person added.

On Thursday night, the soybean processors group Abiove said in a statement it’s “cautiously following” recent statements on preserving the Amazon. It also reiterated its commitment to the environmental agenda, adding that its companies don’t acquire or finance soy from farms where deforestation has been detected.

One meat executive said in an interview that, while agribusiness may be disappointed by Bolsonaro’s attacks on Macron and joking demands that Merkel should “reforest Germany”, producers are happy with his policies and the European Union doesn’t need deforestation as an excuse if it wants to cut imports.

Other producers mimic Bolsonaro’s defiance in the face of foreign consternation, as well as his disdain for environmental NGOs.

“Bolsonaro’s comments are only controversial for people who don’t know Brazil,” Bartolomeu Braz Pereira, head of soybean farmers group Aprosoja, said in an interview. “Bolsonaro is pulling back the curtains and presenting Brazil how it really is. We had international NGOs imposing the rules, and that isn’t right. After deforesting their lands, they want to tell us how we should protect ours?”

Small-scale producers are feeling emboldened to set fires to recover their fields, less because of Bolsonaro’s bluster than because regulators were completely debilitated in recent years during Brazil’s fiscal crisis, according to Moises Fernandes, an agronomist and environmental consultant in the Amazon state of Rondonia. The fact Bolsonaro keeps speaking out, however, means blame is fully ascribed to him.

“As he’s head of state, logically when he talks any country that already wants to apply commercial sanctions to Brazil can cite that as a factor,” said Fernandes, who voted for Bolsonaro. “The truth is he talks too much: saying you can save the environment by pooping every other day, ordering Angela Merkel to plant trees. Why? Why is he wearing himself out?”

--With assistance from Simone Iglesias.